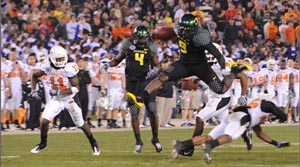 Many of my favorite memories growing up a sports fan in San Diego were watching Holiday Bowl games. Players like Barry Sanders, Steve Young, and Jim McMahon have turned in memorable performances at these games, so you’re likely to see a future NFL star on the field.

Tickets for the 32nd annual Pacific Life Holiday Bowl go on sale to the general public Friday, August 7th at 10 a.m. Tickets also can be purchased online at www.PacificLifeHolidayBowl.com, through TicketMaster at (619) 220-TIXS, or at any TicketMaster outlet.  Ticket prices increase $10 on November 1st so don’t delay.

The game kicks off at 5 p.m., Wednesday, December 30th at Qualcomm Stadium. The game matches teams from the Pacific-10 and Big 12 Conferences. The 2008 game featured a 42-31 Oregon Ducks victory over the Oklahoma State Cowboys in front of 59,106 fans and an ESPN national television audience.

Five of the last six games have sold out.