If you have spent any time driving near the Marine Corps Air Station on Miramar Road, you probably have driven past a collection of vintage military aircraft.  That collection is the pride of the Flying Leatherneck Aviation Museum, the only museum dedicated to Marine Corps aviation.

I joined a group of Visitor Services volunteers on the trip up to Miramar to tour the museum and get a little history on the landmarks – a lot of history, actually.  With some notice to the museum you can request a tour from a docent, and we scored one of their major docents — a Sergeant Major docent, in fact.  Sergeant Major Mike Zacker, USMC (Retired), was there to take us through nearly one hundred years of Marine Corps aviation.  He gave an entertaining tour filled with military zeal and plenty of harrowing personal accounts, as one would expect from a four-decade veteran.

Aside from the impressive collection of aircraft and service vehicles, the exhibits housed within the museum building were extensive, with military artifacts dating back to 1918.  The stuff here is neat enough on its own, but listen to old uncle Alex: get one of the docents to show you around! They’re all retired military of some ilk, and it’ll be your very own interactive History Channel — with no commercials.

This attraction is about 20-30 minutes from downtown, and it’s a treasure for San Diego’s military presence, which includes the families who come to town to see their sons and daughters graduated, promoted or deployed.  Folks in uniform as well as their families are welcomed with open arms (the kind on your body, not the shooting kind).

Museum entry and docent-led tours are free but donations are accepted.  All donations are applied toward the planned construction of the new, world-class Marine Corps Aviation Museum.  When completed, the museum will house extensive, permanent aviation exhibits as well as an on-site restoration facility.  Hopefully, I’ll get to let you know when it’s done.

This weekend, September 5 & 6, will be your opportunity to climb inside the cockpits of four fighter jets on display during Open Cockpit Days! 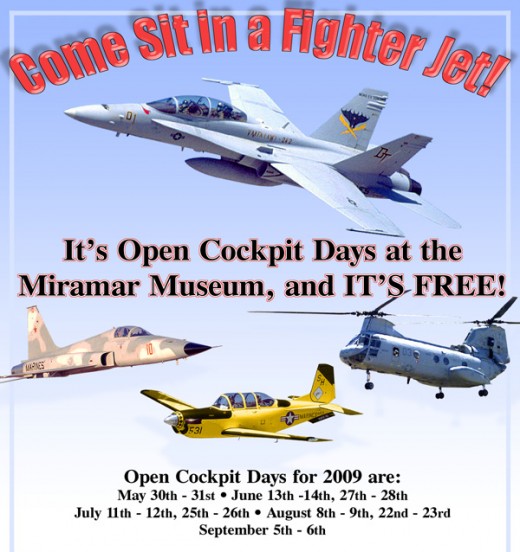