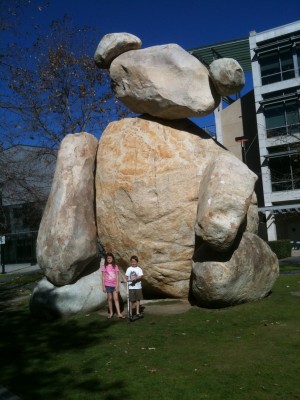 With Valentine’s Day only a few days away, we’re usually thinking about chocolates, flowers and maybe a cute little stuffed bear to give to our sweetheart. How about a two-story 180-ton teddy bear? This bear you can’t actually give to someone, but it is pretty cool to see. Do you know where it is? “Bear” as it is called, can be found in a courtyard on campus at UCSD, La Jolla. Tim Hawkinson, the internationally renowned artist created “Bear” by using eight granite boulders. It measures 23 feet 6 inches tall and weighs 180 tons. The torso alone measures 16 by 17 feet and weighs over 100 tons.

A few days ago, we visited “Bear” in the Academic Courtyard of Jacobs School of Engineering. It was a great day to visit La Jolla and walk around the beautiful campus. “Bear” is tucked sweetly between three very modern looking buildings. When we arrived, there were other non-students visiting the bear and taking pictures with him. I have to say it’s pretty cool to see it up close. His head is titled to the side as if it were looking down at you (if it had eyes of course).

Next time you’re in La Jolla, be sure to stop by and say hi to “Bear”.