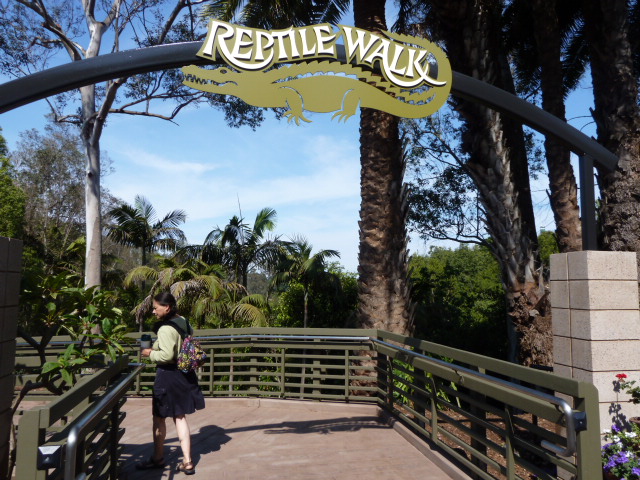 “That San Diego gopher snake is at least four and a half feet long,” said Zoo herpetologist Ken Morgan, as he watched the wriggling reptile stretching out in its new glass enclosure. “It’s the largest one I’ve ever seen.”

Reptiles live on all continents except Antarctica – and the Zoo’s new exhibit accommodates more than 50 species.

What to See on the Reptile Walk

Visitors can see a pair of critically endangered Chinese alligators meandering around an open-air pool. They’re the smallest of alligator species – only about four feet long. They’re also among the rarest: Only about 100 are left in the wild, Morgan said.

Check out an emerald tree boa from South America, a spiky giant horned lizard from Mexico and a Mexican giant tree frog. Search for mata – mata turtles that masquerade as leaves – and be wowed by others with long snake-like necks.

San Diego has more biodiversity than any other county in North America – so plenty of slithering stars are exhibited in the California Native Species building.

If you like the colorful banded San Diego mountain kingsnake, you’ll love the two-headed California kingsnake. At feeding time, one head gets covered with a hood while the other is fed; it keeps the two heads from fighting and injuring each other.

Visitors won’t find any venomous snakes in the new reptile exhibit. To find rattlers, head to Elephant Odyssey; rattlesnakes are housed there, near the condors.