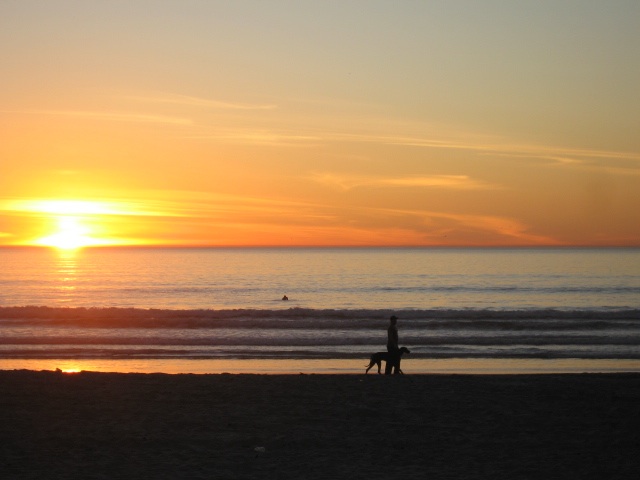 Whether it’s sunrise, sunset or high noon, there is nothing like a leisurely stroll along one of these scenic waterfront walks in San Diego.

Each of these treks can be as easy as you want it to be, modified to a distance that works for you. Wear the right shoes, carry plenty of drinking water, use sunscreen and wear sunglasses. Take along a camera and enjoy the outdoors while being good to your body.

There’s always plenty of parking at Rose Marie Starns South Shores park, so start there and head east. Along the way, you’ll see jet skiers whizzing around the bay, have the chance to watch dancers on roller skates, and will inhale whiffs of dozens of tantalizing ethnic family picnics. Make it all the way to the end of the walkway at De Anza Cove and back and you’ll have racked up about seven miles.

Park at the South Mission Beach jetty and head out on the paved walkway known to locals as the Mission Beach Boardwalk – or, at low tide, walk the beach. Either way, drink in great gulps of salty sea air – and savor the eye-candy. Continue past Belmont Park and its historic roller coaster, past luxury condos, aging beach cottages, funky shops, crowded beach bars and restaurants. Make it to the small park beyond Crystal Pier and back and you’ll have logged close to six miles.

The reserve spans 2,000 acres with eight miles of trails overlooking the Pacific. Pick up a trail map at the visitors center – or even better, join one of the free docent-led nature walks at 10:00 AM and 2:00 PM on weekends. Trekkers can count on seeing lots of the nation’s rarest pine tree, plus native chaparral, wildflowers, extraordinary sandstone formations, dozens of bird species, squirrels, cottontails, skittering lizards and butterflies. Keen observers may spot gray fox, mule deer or even bobcat tracks. On clear winter days, there’s even a chance you’ll catch a glimpse of migrating California Gray Whales.

Tip: Grab a parking space along the beach and walk up the hill to the reserve to add yardage to your walk – and save the $12-$15 it costs to park at the reserve.

Park in the free public lot near Liberty Station’s Corvette Diner and head south along the bayside trail. For a better look at this ever-changing new neighborhood, meander up and down Liberty Station blocks. Or stick to the bayside trail, past Homewood Suites to the Halsey Road pedestrian bridge over the bay. On the other side, take a right on to a dirt trail that links with the Spanish Landing walkway. As you continue walking, check out the Maritime Museum’s ongoing efforts to build a replica of Juan Rodriguez Cabrillo’s flagship, San Salvador. Then view modern-day adventure craft docked in the sheltered bay of Harbor Island. Walk past the Sheraton, cross Harbor Island Drive at the signal, then walk all along the pathway fronting San Diego Bay. If you make it a roundtrip back to Liberty Station, you’ve logged at least seven miles. (Or make it a one-way trip by walking with a friend who parks on Harbor Island.)

Park in the free public lot in front of the Bali Hai and start your walk on the northeast quadrant of the island at Shelter Cove Marina, part of America’s Cup Harbor, named for the international yacht races staged off our coast in 1988, 1992 and 1995. Walk the bayfront path that rounds the tip of Shelter Island, and leads past the concrete gazebo designed by James Hubbell. Continue past a sandy beach that has been a favorite of local toddlers since the man-made island (actually it’s more a peninsula) was built-in the 1950s. Walk out on the Shelter Island Fishing Pier to oogle the catch of the day. Back on the path, continue past the bronze Tunaman’s Memorial, a tribute to local commercial fishermen who lost their lives at sea. On the southwest tip of the island, find a mosaic fountain designed by Hubbell – and in the center of a roundabout, the Japanese Friendship Bell, a gift from San Diego’s sister city, Yokohama, in 1960. For a reminder that San Diego is an international yacht Mecca, continue walking the pathway that leads past hotels on the sheltered side of the bay. When the path ends, make a u-turn – or shorten your walk by cutting across a hotel parking lot to the path fronting San Diego Bay. The complete roundtrip stretches at least three miles.

Know of another great place not included in this list? Let us know in the comments below.