Another year of amazing nightlife has come and gone in San Diego. We’ve had some top-notch talent visit America’s Finest City this year and if you didn’t get out much this year, make it a New Year’s Resolution to get out more and enjoy some of San Diego’s nightlife!

San Diegan’s like to celebrate milestones as much (if not more!) than the rest of the country and as such, there are a multitude of parties to choose from this New Year’s Eve.  Here’s a modest selection of those parties:

Marriott Gaslamp’s “Party From The Street To The Sky” features both the lobby level and rooftop! All Inclusive tickets include unlimited alcoholic drinks, a great selection of food (think sushi, carving stations and chocolate fountains!), DJ’s spinning top tunes in both the lobby and at their Altitude Sky Lounge and a champagne toast at midnight to start the 2014 clock ticking! 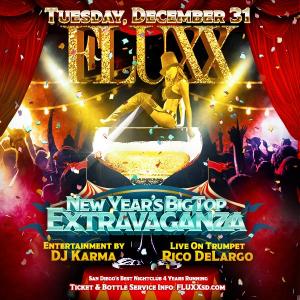 Join FLUXX as they say farewell to 2013 and their latest Fluxxuation “Big Top”. Close out 2013 at one of San Diego’s hottest clubs with music by DJ Karma and Special Guest Rico De Largo live on trumpet. General Admission tickets including entrance and a midnight champagne toast are currently around $80, or spring for the extra $10 and get a VIP ticket which also includes hosted champagne from 8:00 to 10:00 PM and hosted apps from 8:00 to 9:00 PM.

Hosted on the 3-deck Hornblower Yacht “Inspiration,” you and 1,000 of your closest friends can party it up to the beats of Sleeping Giant artists DJ Who & Paulo Da Rosa, DJ Demon and DJ Chris Devoy  This All Inclusive, All VIP experience features unlimited alcoholic drinks and gourmet hors d’oeuvres.

Probably one of the biggest and most well-known San Diego New Year’s Eve parties is Big Night. Sponsored by radio stations Channel 93.3 and 91X, Big Night has 12 different party zones including 6 dance floors featuring both DJ and live band music. Their All Inclusive tickets include unlimited alcoholic drinks, a tasty dinner buffet and fun party favors to get you in the spirit! The party runs from 9pm – 3am and tickets start at $130.

Remember, it’s all about having a good time, but be safe and arrange alternate transportation if you’re going to be drinking. We want you out partying hard in 2014!