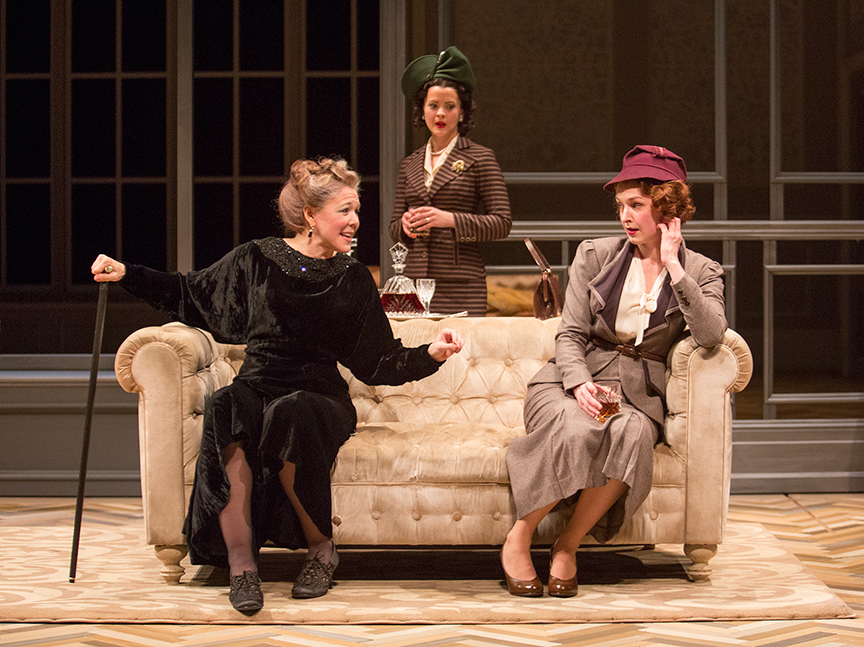 Theater choices in San Diego can range from Tony® Award-winning, Broadway-bound classic and contemporary plays to esoteric puppetry in the Pacific Ocean. Here are some of the goings-on in the dramatic world of San Diego theater.

Time and the Conways by J.B. Priestley

This story opens in a gorgeous English country home in 1919 and later flash forwards to 1937 in the same house: the grown children have gathered to settle family accounts in a world not so bright as it was.

Run Dates: Now through May 4, 2014
> Find out more about Time and the Conways

Water by the Spoonful by Quiara Alegría Hudes.

Winner of the 2012 Pulitzer Prize for Drama. This exciting new play from the playwright behind the Tony Award-winning musical In the Heights follows Elliot Ortiz back in the States after serving in Iraq, reconnecting with family and starting a new life. At the same time, four strangers in an internet chat room seek support to face demons of their own, and soon the real world and the virtual one start to intersect in unexpected ways.

Other upcoming shows include What You Will, Thinking Shakespeare Live, Vanya and Sonia and Masha an Spike, Dog and Pony, Othello, Two Gentlemen of Verona, Into the Woods, and Quartet.

Chasing the Song, book and lyrics by Joe DiPietro.

The creators of the Tony Award-winning musical Memphis follow the evolving American music scene into the early 1960s in this rock ‘n’ roll-inspired new musical in which the female  lead, Ginny,  strives to earn her place in the male-dominated world of songwriting and American rock ‘n’ roll finds itself under siege from the incoming British Invasion.

A Without Walls adaptation of Shakespeare’s Henry IV, part 1 by Herbert Siguenza. El Henry is performed in San Diego’s East Village performance space called Maker’s Quarter and set in the year 2045 in a huge, run-down metropolis called Aztlan City (formerly San Diego), where political apathy and corruption run the city while violent barrio families run the streets. Written in a unique poetic cadence called Calo, which mixes urban Spanish and English slang, this world- premiere adaptation of Shakespeare explores the universal themes of this classic through the lens of Mexican-American machismo.

Other upcoming shows include The Orphan of Zao and Ether Dome.

Lamb’s Players Theatre produces timeless classics and lesser-known theatre gems year-round on their resident stage in Coronado and in their downtown San Diego space at the Horton Grand Theatre. Upcoming shows include:

Funny, moving, and gorgeous to look at, this musical celebrates the extraordinary, everyday women who settled the American West.

We celebrate our 20th Year in Coronado with the Bard’s effervescent comedy of love, longing, impersonation and mistaken identity by setting it at the Hotel Del in the 1940s.

A wild production of Larry Shue’s comic romp has been extended now through May 18th. Please note: this production is at the Horton Grand Theatre in Downtown San Diego.

Other upcoming shows include Les Miserable.

The National Comedy Theatre is San Diego’s nationally acclaimed improv comedy show.  Now in its 15th season, NCT is San Diego’s longest running show and is appropriate for all audiences and runs Thursdays through Sundays in downtown San Diego.

The story is set in 1958 at a critical point in the career of the superstar abstract expressionist painter Mark Rothko.

Watch an evening of one-liners, double-entendres and hysterical routines that pay tribute to and reinvents classic jokes of the past and present.

In this taut and witty drama filled with revelations of love affairs, dreams and the founding of Israel, layers are peeled away to reveal the deep hearts of two caring and compassionate human beings.

Meet Daniel Sickles, a 19th-century congressman, friend to presidents, Civil War general, lover of Queen Isabella of Spain, notorious philanderer, embezzler, murderer, and recipient of the Congressional Medal of Honor. Based on this real figure from American history, Faded Glory promises to be a rollicking comedic romp through this amazing life.

The Civic Theater and historic Balboa Theater downtown play host to traveling Broadway shows and one-of-a-kind performances throughout the year. Upcoming shows include Mike Epps – After Dark Tour on June 21 and Sleeping Beauty at The Balboa Theatre May 17 – 18, 2014.