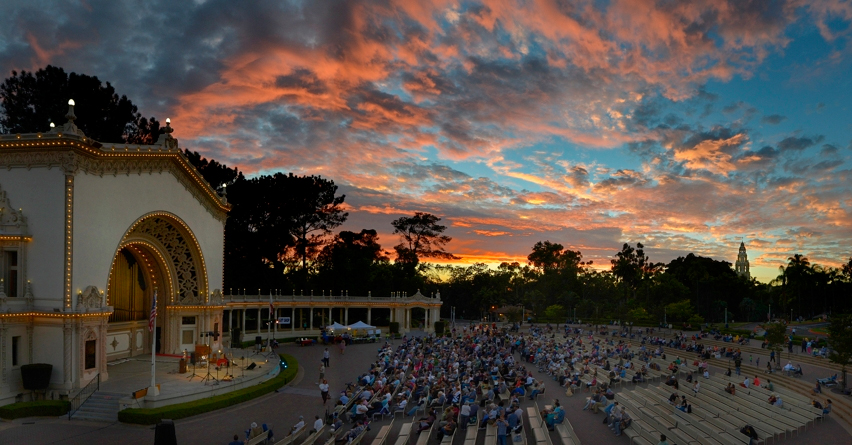 Free twilight summer concerts have become summertime traditions in neighborhoods throughout San Diego County. They’re an opportunity for visitors, locals and their families to socialize, picnic, enjoy music together – and maybe even dance as the sun sets on another perfect San Diego summer day.

Here’s a sampling of what will be staged during the free summer concerts of 2014:

The Point Loma Summer Concert Series opens July 11 with the Mighty Untouchables and continues on consecutive Fridays through August 8 when Detroit Underground takes the stage. Shows run 5:30 to 8:30 PM. Pack a picnic or buy food at the venue. Bring blankets, lawn chairs and Frisbees to Point Loma Park, 1049 Catalina Blvd.

Pacific Beach Concerts on the Green are set for Sundays July 20 through August 10. Shows run from 4:00 to 6:30 PM at Kate Sessions Park (Lamont Street, just north of Beryl). Bring your own food and drink.

Balboa Park’s Twilight in the Park concert series kicks off at 6:15 PM June 17 and continues on Tuesdays, Wednesdays and Thursdays through Aug. 28 at the park’s Spreckels Organ Pavilion. The hour-long shows feature everything from classical music to R&B.

Coronado’s Promenade Summer Concert Series series is set for 6:00 PM on Sundays, through September 7, at Spreckels Park, 7th and Orange. Families (but no dogs) are welcome to picnic during the 90-minute shows.

Del Mar’s Summer Twilight Concerts are set for Powerhouse Park, overlooking the Pacific, at 1600 Coast Blvd. The series begins June 17 with Rockola, followed by Back to the Garden on July 1, the Heroes on July 22, Haute Chile on August 12 and Sully and the Blue Eyed Soul Band on September 7. Show time is 7:00 PM, with pre-show entertainment beginning at 6:00 PM.

El Cajon’s Dinner & a Concert series is set for 6:00 to 8:00 PM Fridays through September 26 on the Prescott Promenade near East Main Street and Rea Avenue in downtown El Cajon. The family oriented venue is smoke-, alcohol- and dog-free. No need to pack a picnic; about a dozen restaurants edge the promenade, offering on-the-spot dining or picnics to go.

Santee’s Free Summer Concerts are scheduled 6:30 to 8:30 PM on Thursdays, June 19 through August 28. (except July 3) at Town Center Community Park East, 550 Park Center Drive in Santee. The Catillacs will open the series. Picnics are welcome, but know that food trucks rally nearby.

Did we miss a free summer concert series in San Diego? Let us know in the comments below.