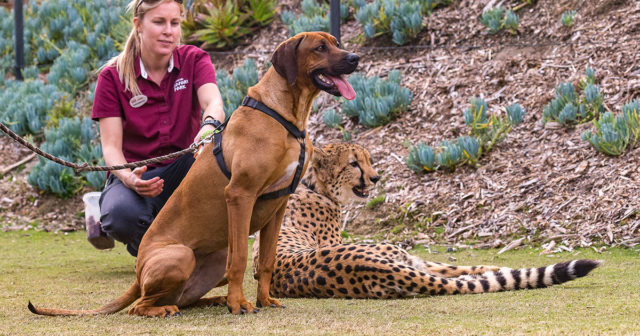 Forget what you might have heard about cats and dogs being natural enemies—at the San Diego Zoo and San Diego Zoo Safari Park they’re getting along famously. Just look at the friendship between Ruuxa, a male cheetah, and Raina, a domestic dog.

Cheetahs in zoo settings are frequently paired with dogs for play and companionship. This buddy system, now used in zoos across the country, was created right here at the San Diego Zoo. Zookeepers say Ruuxa, who was born at the San Diego Zoo Safari Park’s Cheetah Breeding Center, and Raina are one of their most closely bonded pairs.

Cheetahs can be seen at the downtown zoo periodically, but for a more immersive experience, visitors should check out the San Diego Zoo Safari Park near Escondido. Every weekday at 3:30 PM, the park’s cheetahs race down a 330-foot track hitting speeds of 70 miles per hour, an experience that is included in general admission. Visitors looking for even more can purchase an additional $59 ticket for a private safari tour where they can get up close and personal with the cats.

The first cheetah-dog pair to buddy up was a male cheetah named Arusha and a golden retriever named Anna, in 1980. Beginning with their pairing by zookeepers, it became obvious that dogs have a positive effect on some of the fleet-footed cats.

Cheetahs are generally peaceful among themselves, except when males occasionally fight over females in the wild, and easily get along with their canine counterparts.

Dogs and cheetahs are introduced as puppies and cubs, respectively. It takes fewer than three months for them to get comfortable enough to play together all day and nestle against one another at night. In fact, they do everything together except eat. Cheetahs and dogs also have a symbiotic relationship in their native habitat. At the moment, three dogs are paired with five cheetahs at the San Diego Zoo, and five dogs are paired with six cheetahs at the Safari Park.