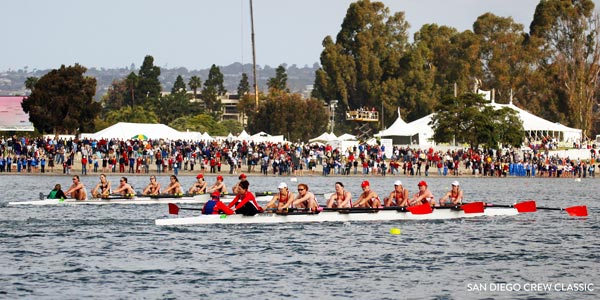 When: March 21-25, 2018
Where: Valley View Casino Center – 3500 Sports Arena Blvd, San Diego, CA 92110
A breakthrough ice experience where world-class ice skaters and acrobats take their new frozen playground by storm with speed and fluidity as they challenge the laws of gravity with a flurry of unexpected acrobatics.

When: March 24 – April 8, 2018
Where: San Diego Zoo – 2920 Zoo Dr, San Diego, CA 92101
Come celebrate spring by taking a Yaycation at the San Diego Zoo! As the days grow longer, the Zoo bursts into bloom with fun for the whole family. Join us for oodles of special animal experiences, a fun treasure hunt, tasty, limited-time treats, and laughter with zany Dr. Zoolittle, as the San Diego Zoo Rock Radio DJ adds to the lively beat.

When: March 24-25, 2018
Where: Corona Oriente Road, San Diego, CA 92109
Regarded as the first major regatta of the year, the San Diego Crew Classic brings together thousands of athletes from more than 100 universities, clubs and high school programs from across the United States to participate in this premier rowing event in San Diego. Established in 1973, for many rowers, the Crew Classic is the highlight of their competitive rowing careers and a competition for future Olympians, as well as for those new to the sport. Ranging in age from 14 to 84, rowers compete each year in over 100 races in various divisions. The master level (over age 21) is the fastest growing segment of the sport. Many master rowers are novice rowers, while others are reliving their college and club experiences.

When: March 24-25, 2018
Where: South Harbor Jetty, Oceanside, CA
Sponsored by Western Surfing Association, this is a surfing competition to qualify competitors to the West Coast Championships, U.S. Championships, Prime Event and any World Team Event. Viewing the competition is free and open to the public; all ages will enjoy.

When: March 24, 2018
Where: SDCCU Stadium – 9449 Friars Rd, San Diego, CA 92108
Club América and Club Tijuana will meet in a friendly match at SDCCU Stadium in San Diego. A 12-time Liga MX champion, Club América will play its first match in San Diego since 2013. The Águilas and Xolos will renew acquaintances on San Diego soil for the first time in five years. They last met in 2013 at Petco Park, a match won by América, 2-1. A year prior, the squads met at then-Qualcomm Stadium and the two sides battled to a 1-1 draw.