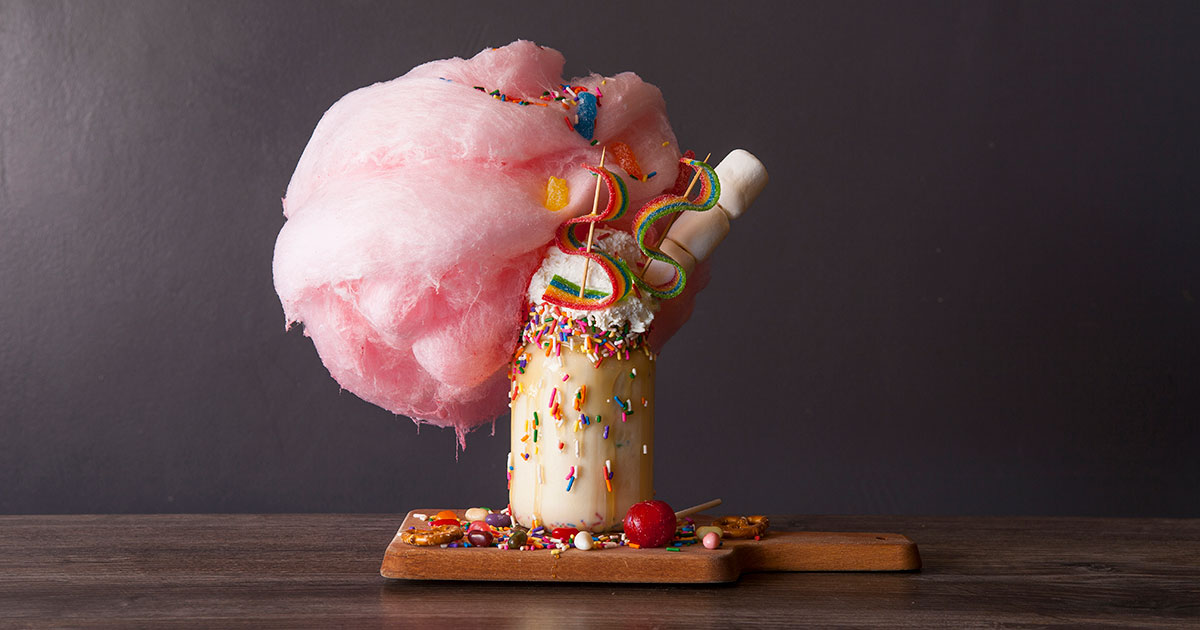 San Diego’s Convoy Street runs through the central neighborhood of Kearny Mesa. Strip malls packed with restaurants whose signs—in Japanese, Korean, Chinese, and other Asian languages—bear the names of some of the best eateries in town. Popular favorites among locals include Shabu Shabu, Tofu House, and dim sum at Emerald restaurant. But excellent ramen, poke, bulgogi, dumplings, pastries, and desserts aren’t the only reasons to come to Convoy—there’s also karaoke, arcade games, and bliss-out sessions at Korean spas.

Where: 4647 Convoy St, San Diego, CA 92111
No matter how delicious the Chinese and Taiwanese dishes at this restaurant—including things like braised roasted duck noodle soup, pork and chive dumplings, and foie gras pork boa—they’ll never be what the place is known for. Not as long as they continue serving their “Freakshakes,” anyway. Milkshakes born to be shared and lavishly topped with donuts, sprinkles, peanut butter pretzels, and sea urchin cotton candy (take a moment to wrap your head around that one) have a way of stealing all the attention.

Where: 4170 Convoy St, San Diego, CA 92111
Arrive early at this uber-popular, family-friendly restaurant serving nearly 250 traditional and inventive Vietnamese dishes. Copious fresh vegetables and herbs compliment meats at this eatery that started in one family’s kitchen and first grew into a restaurant in Linda Vista in 1988.

Where: 3904 Convoy St, San Diego, CA 92111
You get to be the chef at this Japanese barbecue joint. The grill-your-own style (which takes place at an in-table grill) is similar to the Korean barbecue probably more familiar to American diners, but marinades are more miso-heavy.

Where: 4646 Convoy St #101-A, San Diego, CA 92111
Choose your albacore tuna, octopus, or salmon poke over rice, greens, or in a rice and seaweed wrap that resembles a tortilla (hence the name, a portmanteau of “poke” and “burrito”). Then customize your seafood and base with all manner of toppings familiar to poke lovers: furikake, masago, tempura flakes, and even Flamin’ Hot Cheetos.

Where: 4428 Convoy St #100, San Diego, CA 92111
No single term could describe this 20,000-square-foot restaurant, bar, nightclub, and arcade equipped with 14 private karaoke rooms. Work up an appetite playing pool or air hockey, or burn off dinner by dancing the night away. The Korean-influenced menu sports everything from fried rice and nachos to pork belly burgers, oysters, and sous vide steak. The drink list is as expansive as the establishment itself, with a dizzying array of barrel-aged cocktails, tiki cocktails, 50 draft beers, and a lengthy litany of liquor. And let’s not forget the karaoke rooms, where six people can rock the mic for $40 per hour.

Where: 4609 Convoy St, San Diego, CA 92111
Dessert is easily as much fun as dinner in Convoy. Save some room for Iceskimo’s Taiwanese shaved ice—a style somewhere between ice cream and Hawaiian shaved ice. The handmade ice blocks in flavors like Black Sesame and Matcha Green are shaved down and then topped with tantalizing extras like Nutella, lychee, Bananas Foster, and oolong milk tea.

Where: 3927 Convoy St, San Diego, CA 92111
Escape from the busy cityscape by popping into this jjimjilbang, or Korean spa, complete with a Himalayan salt sauna room, a red clay sauna room, an ice room, dry sauna, and steam sauna. Reservations aren’t necessary but recommended for massages or body scrubs. And you won’t even need to leave the premises for Korean food! Just pop into their restaurant, serving spicy kimchi pork stew, bibimbap, bulgogi, and more.

Where: 4646 Convoy St, San Diego, CA 92111
Shabu shabu is a style of Japanese food in which the individual cooks their vegetable and selection of meat in a pot of boiling water. Although it seems simplistic in nature, the flavor lies in the succulent dipping sauces. Shabu Shabu literally translates to “swish-swish” because the meat is swished in the boiling water, which can be cooked from medium-rare to well-done.

Where: 3709 Convoy Street #101, San Diego, California 92111
This popular eatery is inspired by the owner’s frequent travels to Asia learning about trends in design and dining. If you’re seeking authentic dim sum, you’ll be pleased to know it’s served all day long. Their menu is expansive and includes Chinese regional cuisine, healthy alternatives, and seasonal favorites.

Where: 4646 Convoy St #116, San Diego, CA 92111
Experience the wonders of a bubbling hot-stone pot with so many options to choose from. Whether you’re seeking beef, chicken, shrimp, or tofu, your meal is steaming with flavor. Don’t miss out on a local favorite in San Diego.