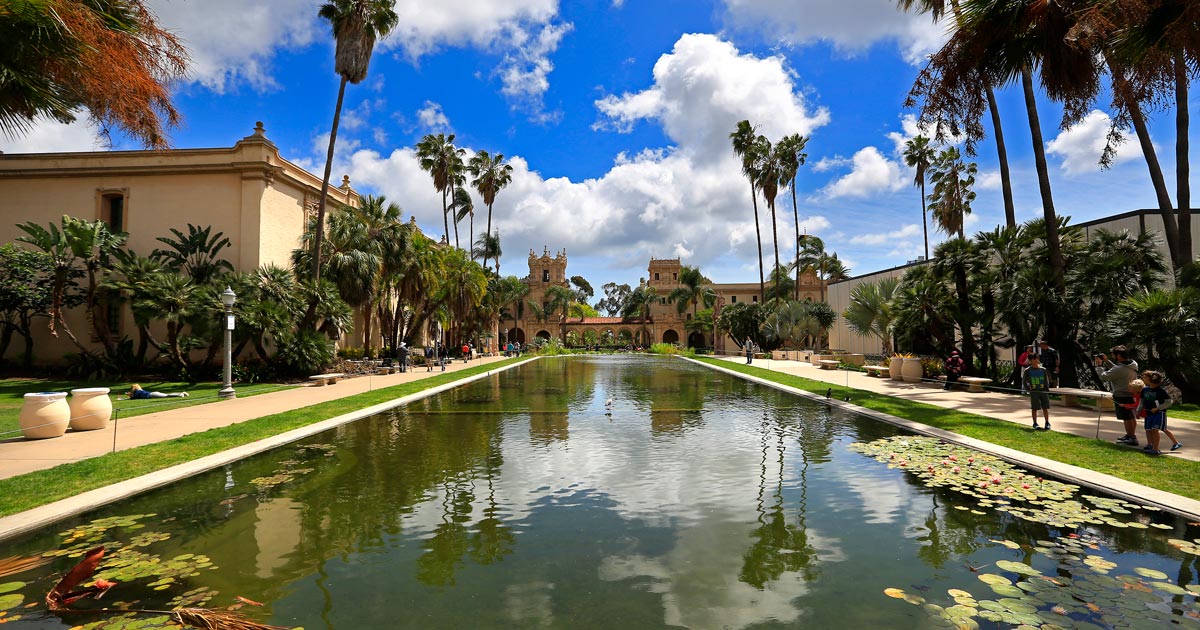 As summer heats up, so are the good times in Balboa Park. Friday nights continue to sizzle with food trucks, folks and fun featuring extended hours at many of the most popular museums. But every day in the park offers plenty to explore with provocative new exhibits, theater productions and more.

Pick Up (Some Food) Trucks

When: July 6, 13, 20 and 27
Where: El Prado, Balboa Park, San Diego, CA 92101
Looking for a fun and movable feast? Then Balboa Park is the destination. Every Friday through Sept. 28, a fleet of food trucks will roll into the park at 4:00 PM to provide a wide range of gastronomic options from appetizers to desserts to everything in between. To spice up the night, DJs and musicians will be on hand in the Plaza de Panama throughout the summer. Of course, after filling your belly, it’ll be time to feed your mind by visiting the museums such as the Museum of Man, the San Diego Natural History Museum and the Fleet Science Center with extended summer hours, which runs through August 31.

Opens: July 8, 2018
Where: San Diego History Center – 1649 El Prado, San Diego, CA 92101
This is the first ever exhibit in Balboa Park to explore the rich and important history of San Diego’s LGBTQ+ community as it examines how it faced and fought persecution and intolerance over the years to gain not only acceptance but also influence. The exhibit features photographs and narratives that help the visitor explore such themes as identity, the concept of family and the future of the LGBTQ+ community. The exhibit is in collaboration with Lambda Archives of San Diego and curated by Lillian Faderman, a distinguished scholar and author of the books The Gay Revolution and Harvey Milk: His Lives and Death. The San Diego History Center, a Smithsonian affiliate, has a Give Forward admissions policy, which allows visitors to pay only what they can, making the exhibit and the museum accessible to anyone.

When: Throughout July
Where: San Diego Museum of Art – 1450 El Prado, San Diego, CA 92101
Explore one of the world’s finest collections of Indian art while delving into the stories that inspired them at the San Diego Museum of Art. The Epic Tales from Ancient India exhibit features more than 90 works of art from the museum’s renowned Edwin Binney 3rd Collection, which Binney, a Crayola heir, amassed over his lifetime. The exhibition helps tell the tales of adventure and romance through the art but in narrative form so to honor the paintings original intention, which was to serve as illustrations to works of literature. Colorful, vibrant and whimsical, this exhibit allows visitors to explore one of the finest, and most comprehensive private collections of South Asia paintings outside of India. Want to see something truly epic? Make sure to attend the museum’s Steps Series on July 27, On the Steps at SDMA: Telling Epic Tales, which will celebrate the exhibit with a Bollywood-inspired dance performance, art-making activities, live art by local makers and henna artists all out on the steps of the museum.

Steampunk: With a Retro Twist

When: Throughout July
Where: San Diego Automotive Museum – 2080 Pan American Plaza, San Diego, CA 92101
Dive into the weird, wild world of steampunk, which couples spirit of science fiction with a Victorian vibe at the San Diego Automotive Museum. Can’t quite picture what steampunk is? Think of Jules Verne and H.G. Wells. Collaborating with local artists, the museum aims to have the exhibit interpret and introduce steampunk to new audiences featuring everything from modified steampunk vehicles to clothing to art to everyday objects. Come get a full head of steampunk this summer.

When: July 25, 2018
Where: Friends of Balboa Park Carousel near the San Diego Zoo
What goes around comes around, which means it is time again for National Carousel Day. And you couldn’t pick a nicer or more historic carousel than the one in Balboa Park to celebrate its invention. All but two pairs of the carousel’s menagerie of animals are the original European hand-carved creations. It is also one of the few carousels in the world that still offers the brass ring game. The Friends of Balboa Park, which has taken over the maintenance and operation of the historic carousel, is offering free carousel rides, music, food and face painting from 11:00 AM to 3:00 PM. You’ll definitely want to give it a whirl.

The Plays Are the Thing

The Tempest and Dr. Seuss’s The Lorax

When: Throughout July
Where: The Old Globe – 1363 Old Globe Way, San Diego, CA 92101
There is really nothing quite like seeing some of Shakespeare’s most iconic plays featuring seasoned actors on a summer night in the Old Globe’s outdoor 615-seat Lowell Davies Festival Theatre surrounded by fragrant eucalyptus trees. This year the Old Globe’s Shakespeare Festival features a must-see production of The Tempest with actress Kate Burton – who appeared as the vice president in Scandal and is also Richard Burton’s daughter – as Prospera, a role traditionally played by a male. The Tempest runs through July 22. But as tempting as that production might sound it is hardly the only crowd-pleasing theater production available in July. Premiering July 2 and running through August 12, is Dr. Seuss’ The Lorax, a critically acclaimed musical that playfully pitches environmental stewardship in what critics call a “mad, uproarious delight.”

When: Throughout July
Where: San Diego Art Institute – 1439 El Prado, San Diego, CA 92101
Southern California is no doubt a colorful place. For years its spirit and medley of hues has served as inspiration for all sorts of artists. This new eye-popping exhibit moves the examination of color beyond the canvas with contemporary artists using a variety of mediums – from video to installation to paint – to create an experience that explores Southern California’s culture through colorful expressions in ways that defy explanation.

When: Starts July 17 (Reservations begin on July 2)
Where: The San Diego Natural History Museum – 1788 El Prado, San Diego, CA 92101
Escape rooms are all the rage. The San Diego Natural History Museum offers the all puzzle- solving fun of an escape room with a scientific twist. The premise is this: The world is threatened by a deadly viral outbreak and you need to weed through the clue-filled archives of a famed botanist to find the solution and save the world. Oh, and you need to do it in 60 minutes or less. Escape the Nat is available for bookings for groups between two and six people on Tuesday through Friday from noon to 5 p.m. and on Saturday and Sunday from 10:00 AM to 5:00 PM. The cost is $80 between $180 depending on your group size and includes admission to the museum, so you can experience everything The Nat has to offer as before and after your escape room visit.