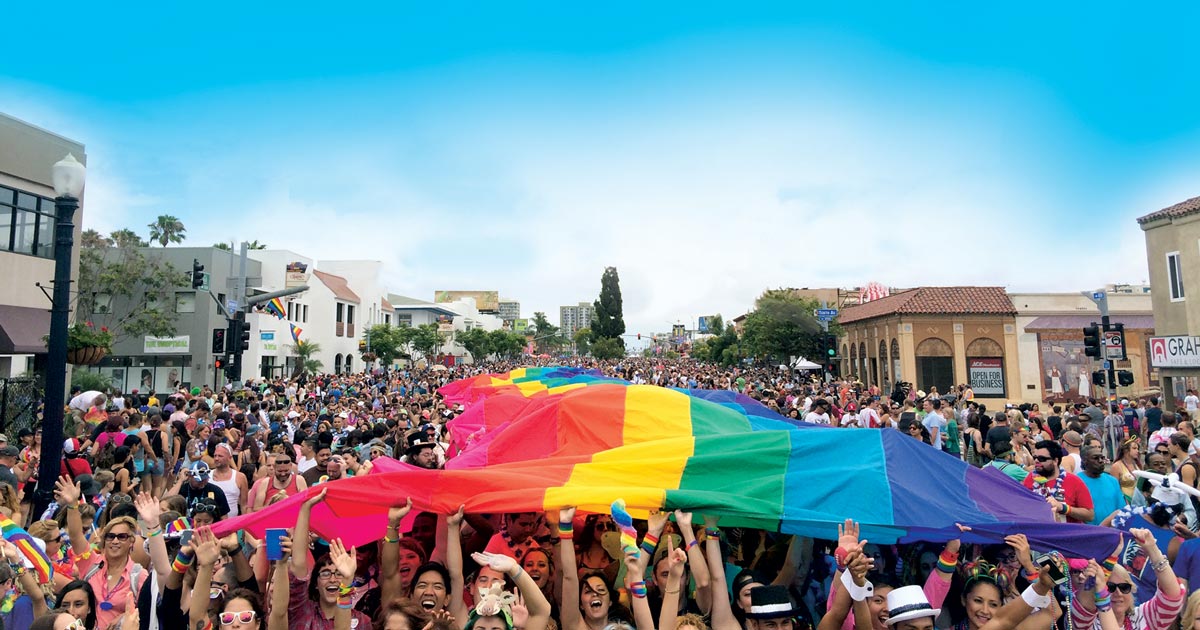 Spend the upcoming weekend in San Diego enjoying everything California’s Beach City has to offer including Pride, Over the Line and these top things to do.

A Funny Thing Happened on the Way to the Forum

When: July 11 – August 12, 2018
Where: North Coast Repertory Theatre – 987 Lomas Santa Fe Drive, Solana Beach, CA 92075
Excitement has been running so high for North Coast Rep’s Season 36 closer, A Funny Thing Happened On The Way To The Forum. The theatre has already extended the beloved musical by one week to accommodate the ticket requests. Composer Stephen Sondheim has created a laugh-a-minute audience favorite with songs such as “Comedy Tonight,” “Lovely” and “Everyone Ought to Have a Maid.” Winner of six Tony Awards including Best Musical, FORUM was written by Burt Shevelove and Larry Gelbart, who based their farce on the over-the-top antics of the Roman slave Pseudolus, who will do anything to win his freedom and bring two lovers together. Tickets are already flying out the door, so it’s best to order early.

Drag Me to the Del

When: July 12, 2018
Where: Hotel del Coronado – 1500 Orange Ave, Coronado, CA 92118
Hotel del Coronado and US Bank present Drag Me to The Del, a Drag extravaganza with headliners Alyssa Edwards, from RuPaul’s Drag Race, and the iconic Lady Bunny, in addition to Dina Delicious, Jackie Beat, Paris Sukkomi Maxx, Kickxy Vixen Styles, Tia Wanna and Judas Joe Manson. The evening will be hosted by DangiloGogo and Paris Sukkomi Maxx and features drinks, dancing and music by DJ Lina Bradford of Fire Island fame. All ticket proceeds from this event will benefit The San Diego LGBT Community Center and San Diego Pride.

Over the Line Tournament

When: July 14, 2018
Where: Hillcrest Pride Flag – University Ave and Normal St, San Diego, CA 92103
The annual San Diego Pride Parade the largest single-day civic event in the region, and is among the largest Prides in the United States, attracting over 200,000 cheering supporters of the LGBTQ community!

When: July 14-15, 2018
Where: Marston Point, Balboa Park – Eighth Ave, San Diego, CA 92101
San Diego’s biggest summer dance party is calling your name! Celebrate diversity under San Diego’s amazing sky and dance the day and night away! There will be 4 phenomenal stages, spanning 2 days, with over 100 entertainers and thousands of your closest friends. All people – 1 love! We invite singles, couples, friends, families, youth, and people of all ages to participate in the annual Pride Music Festival!

When: July 14-15, 2018
Where: 10818 San Diego Mission Road, San Diego, CA 92108
The festivities include food, live entertainment, dancing, and traditional activities like the Blessing of the Bells and the Blessing of the Animals. All five Mission bells are rung during the weekend festivities, including the original bell dating back to 1802. The Festival of the Bells is a great family event and an opportunity for everyone to visit and learn more about this historical landmark.

When: Thru August 12, 2018
Where: Cygnet Theatre – 4040 Twiggs St, San Diego, CA 92110
Follow King Arthur and his Knights of the Round Table as they embark on their quest for the Holy Grail. Flying cows, killer rabbits, taunting Frenchmen, and show-stopping musical numbers are just a few of the reasons you’ll be eating up Spamalot. Winner of three Tony Awards, including Best Musical, the show elevates silliness to an art form.