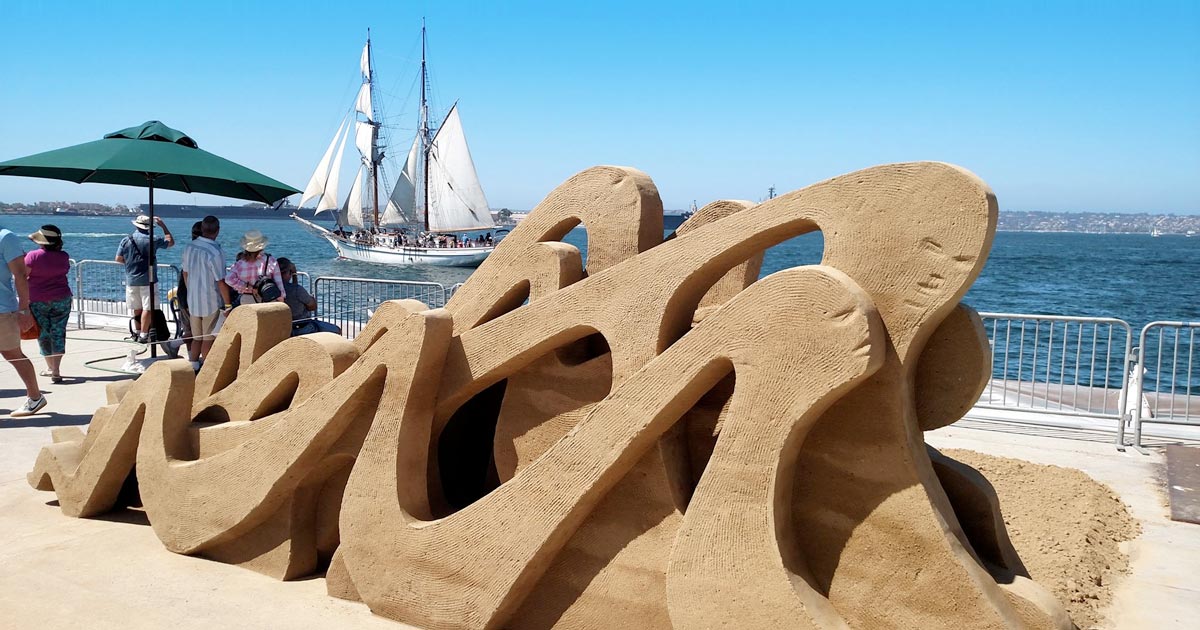 Spend the upcoming Labor Day weekend in San Diego enjoying everything California’s Beach City has to offer including these top things to do.

When: August 31 – September 3, 2018
Where: Broadway Pier and Landing – 1000 North Harbor Drive, San Diego, CA 92101
One of the top 20 “Must See” seaside festivals in the world according to American Express and USA Today’s 10 Best, the U.S. Sand Sculpting Challenge and Dimensional Art Exposition will return to San Diego’s downtown waterfront for 2018. This will be the seventh year that one of the world’s most important sand-sculpting competitions will be held on this built-for-the-occasion beach, with over 300 tons of sand dumped on the pier on San Diego’s Big Bay. The 7th annual edition will be open to the public Aug. 31 – Sept. 3. The Port of San Diego is again Presenting Sponsor, as the event is held on its beautiful Broadway Pier and Landing. So come and celebrate Labor Day on the Bay with us.

When: August 31 – September 2, 2018
Where: Embarcadero Marina Park South – 206 Marina Park Way, San Diego, CA 92101
Our glorious summer winds down but not before the cannons and fireworks light up San Diego Bay to Tchaikovsky’s awesome ‘1812 Overture’. Join us as we celebrate summer’s end in spectacular style!

When: August 31 – September 2, 2018
Where: Barona Sports Park – 1095 Barona Road, Lakeside, CA 92040
Join the Barona Band of Mission Indians for a weekend of contest dancing in all categories, camping, drums and cultural immersion. Dancers will be competing for over $60,000 in prize money!

When: September 1, 2018
Where: Menghini Winery – 1150 Julian Orchards Dr, Julian, CA 92036
Julian’s Grape Stomp Festa is a great way to spend a Saturday and this year’s is shaping up to be one of our best. With ten local wineries offering sips to sample, a wide variety of food and shopping opportunities, great Italian music provided by Roman Holiday, Bocce Ball Court, a little extemporaneous dancing here and there, this will be a party to remember!

When: September 2, 2018
Where: SDCCU Stadium – 9449 Friars Road, San Diego, CA 92108
Big SoCal Euro is one of the largest all-European car events on the west coast. We are excited to be one of the longest running car events of it’s kind, since 2001. The event features more than 3,000 European cars from throughout the region. Bring your family to meet other car enthusiasts and enjoy raffles, drag racing, great food, automotive vendors, swap meet, afterparty and more. Where what you bring is part of the show! #BIGSCE

When: Thru September 3, 2018
Where: SeaWorld San Diego  – 500 SeaWorld Dr, San Diego, CA 92109
Surf beyond your expectations as the sea comes alive at night and dive into Electric Ocean, SeaWorld’s fantastic summer nighttime celebration.

When: Thru September 3, 2018
Where: San Diego Zoo – 2920 Zoo Dr, San Diego, CA 92101
Stay after dark and help us celebrate summer during Nighttime Zoo! Come “rock and roar” every day this summer with live music, fun shows, and special animal encounters. The fun begins before the sun goes down with an amazing trampoline act, Dr. Zoolittle’s special performances, and African-themed entertainment for the whole family. Musicians will serenade and engage guests with tunes ranging from classic rock riffs to jaunty brass band sounds to sweet beats from throughout Africa. A procession of larger-than-life animal puppets headline and end-of-the-evening performance that is sure to wow viewers of all ages.

When: Thru September 3, 2018
Where: Del Mar Thoroughbred Club – 2260 Jimmy Durante Blvd, Del Mar, CA 92014
San Diego horse racing takes place where the “turf meets the surf” at the Del Mar Racetrack. Fans flock to the track each summer to wager on their favorite horses during the popular, annual Del Mar Thoroughbred Club racing season, mid-July – early-September. Be part of the magic and nostalgia of this long-time horse race tradition dating back to 1937 when Bing Crosby greeted the first guests, and Seabiscuit won by a nose in the infamous race in 1938. This season features the nation’s top race horses, trainers and jockeys, and plenty of fun in the sun.