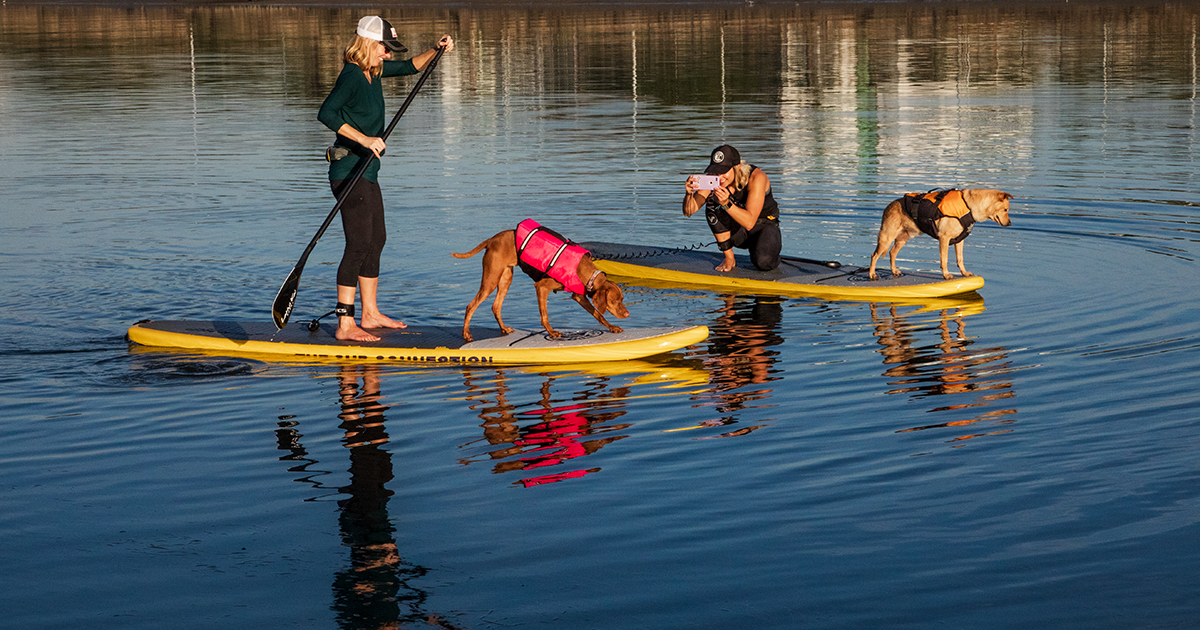 San Diegans love their dogs as much as they love a vibrant sunset and a Baja fish taco. That goes for the owners of bars, restaurants, and stand-up paddle boarding schools, among other places dogs aren’t just allowed, but cordially invited. Grab a leash (or not) and head out for a full day of adventure, eating, drinking, and socializing, with your dog in tow.

Where: 100 Park Blvd, San Diego, CA 92101
Neighborhood: East Village/Petco Park
Dogs don’t need to miss a single inning of Padres games when you have tickets to the Barkyard—a semi-private spot from which to watch the game. Modeled after a backyard, this dog-friendly zone in left-center field has in-seat menu service, a watering station, and all the comforts man, woman, and dog could ask for.

Where: 5156 W. Point Loma Blvd, San Diego, CA 92107
Neighborhood: Ocean Beach
Humans are technically allowed at the far north end of Ocean Beach (immediately south of the Mission Bay entrance jetty). But the place decidedly belongs to off-leash canines, who gather there in large numbers, every day of the year, to do what any person or dog does on San Diego’s beaches: splash around in the water, take in a sunset, and make some friends.

Where:  2940 Sandy Ln, Del Mar, CA 92014
Neighborhood: North County Coastal / Del Mar
Del Mar is the only North County city that allows off-leash dogs on the beach, and the only place that’s allowed is the vicinity around Dog Beach, otherwise known as North Beach, just north of the San Dieguito River mouth. From dawn to 8:00 AM off-leash dogs are allowed between 25th Street (on the other side of the river mouth) and Solana Beach.

Where: 3052 El Cajon Blvd., San Diego, CA 92104
Neighborhood: North Park
This kombucha brewery claims it was also the world’s first hard kombucha bar. You and your pup can think about that fact while sipping on organic house-brewed flavors like Blood Orange Mint, Honey Ginger Lemon, Cucumber Mojito, and something enticingly called Midnight Painkiller.

Where: 2210 Kettner Blvd., San Diego, CA 92101
Neighborhood: Little Italy
For you, there’s artisan pizza, sandwiches, salads, and specialty cocktails. For Fido, there are two dog treats: a bone broth made with short ribs, and a peanut butter-based goodie made with pumpkin or other seasonal additions.

Where: Courtyard Marriott Liberty Station – 2592 Laning Road, San Diego, CA 92106
Neighborhood: Liberty Station
Novice human and canine SUPers learn all the basics before hopping on a board and paddling around San Diego Bay while an instructor records the adventure via GoPro. Participants need not bring anything (life jackets for you and your dog are included) except doggie treats, which can make an uneasy dog a bit more keen. The one-hour outing that takes you under the North Harbor Bridge.