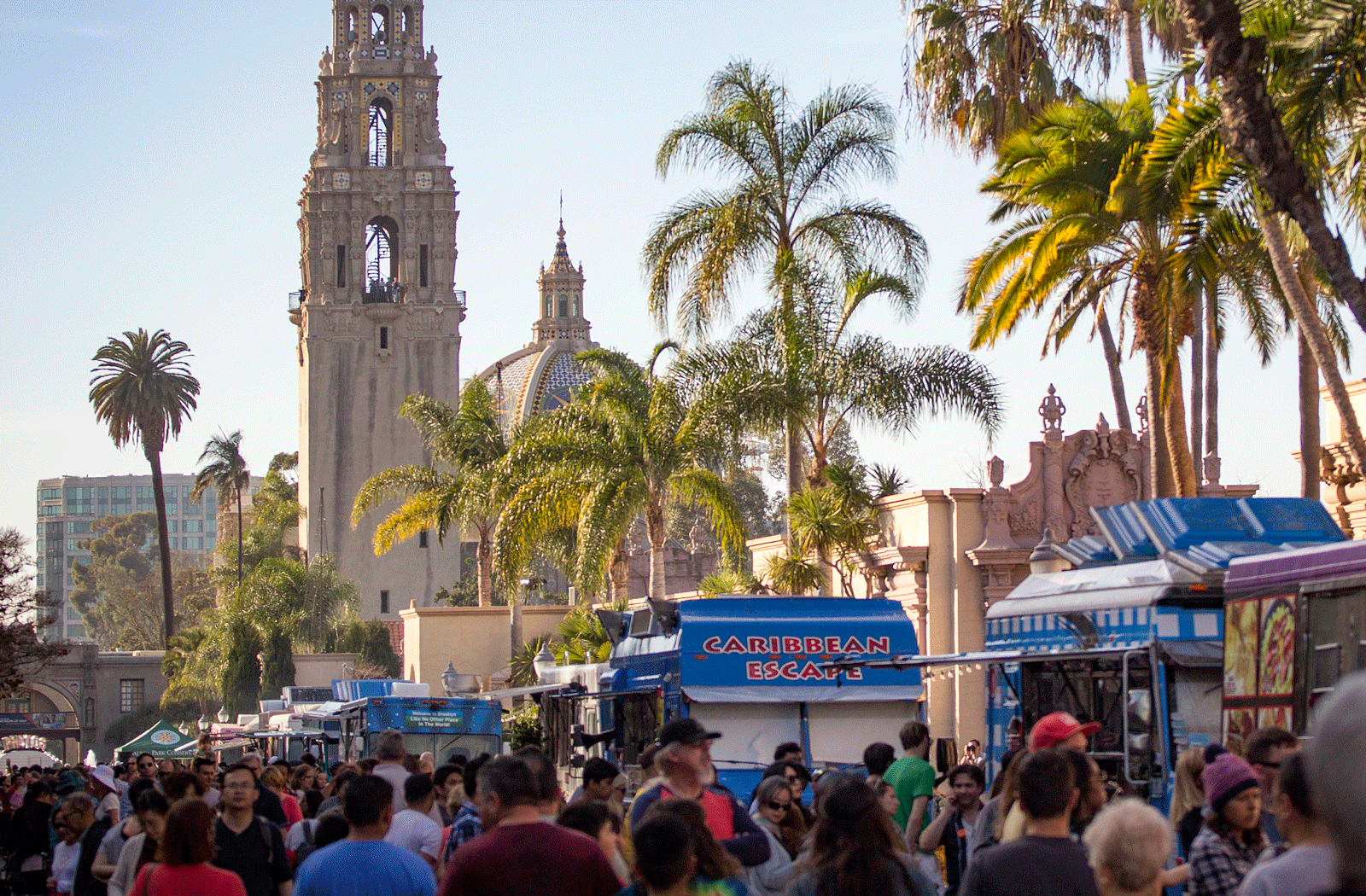 This month Balboa Park is in full bloom with a spectacular slate of summer fun – from food trucks to extended hours at many of the most popular museums to trivia nights and a rooftop bar to a playground for the 21-and-up set. Come perfect the art of summer in San Diego’s cultural heart.

When: June 1 – August 31, 2019
Where: Fleet Science Center
Have you ever wanted to unleash your inner child all with an adult beverage in hand? Well, now you can – and even gain some knowledge in the process. On Saturday nights throughout June (and on into July and August), the Fleet Science Center is opening up its newest exhibition to the 21-and-up crowd to enjoy its adult-sized indoor playground, which features a 31-foot slide that clocks your speed, augmented reality sandboxes, hoop shooting with distortion googles and more. There’s even special pricing starting at 7 p.m. Even better? No kids allowed so you won’t be tempted to push them out of the way on your way to the slide – or the no-host bar.

When: Thru August 30, 2019
Where: theNAT
Get a window into San Diego’s bio-rich region with a craft beer (or wine) in one hand and a street taco in the other. On Thursday and Friday nights, The Nat is keeping its doors opens so visitors to the museum (after 5 p.m. it is half-price admission) can enjoy its immersive exhibitions, nature-inspired 3D films, trivia fun (Thursday nights only), unexpected pop-up programming and the always eye-popping views from its rooftop bar – which is open to everyone – even kids. Also, if you are looking for a great escape, The Nat is also giving special evening access to its botanical-inspired escape room. There’s so much to do – you may never want to leave.

When: Thru September 27, 2019
Looking a movable feast that provides plenty of options? Then you’ll want to get thyself and thy stomach on over to Balboa Park for its Food Truck Fridays. Throughout the month of June, a fleet of food trucks will roll into the park at 4:00 PM to provide a wide range of gastronomic options from appetizers to desserts to everything in between. The event also features entertainers as well as DJs and musicians playing in the Plaza de Panama. It is also a perfect way to have a low-stress picnic. Just grab something to eat at one of the many trucks in tow and then head over to the West or East lawns right outside of the Botanical Building to soak up the scene. (Little known fact: You can BYOB and consume your own adult beverages in this part of the park until 8 p.m. but you can’t bring or use glass of any kind.) Of course, after filling your belly, it’ll time to feed your mind by visiting the many museums offering extended summer hours on Fridays.

When: June 16 – July 17, 2019
Where: The Old Globe
Summer is when Shakespeare shines during The Old Globe’s summer festival that celebrates the best of the bard. This summer is no different with the season getting its start with the charming romantic comedy classic “As You Like it,” which centers on mistaken identity and the foibles of love. And while all the world may be a stage, there is nothing quite like seeing Shakespeare reimagined in the 615-seat Lowell Davies Festival Theatre that is framed by towering Eucalyptus trees.

When: June 21 – September 8, 2019
Where: San Diego History Center
You are going to want to (drag) race to the San Diego History Center’s newest exhibition that explores the history, performances and people that have made the local drag scene such a standout. As part of its groundbreaking LGBTQ+ San Diego: Stories of Struggles + Triumphs and to commemorate the 50th anniversary of Stonewall, the Legendary Drag Queens of San Diego brings all the glamour and drama you’d expect with glittery costumes and the personal stories of San Diego’s leading performers who have made a name for themselves not only locally but also nationally. You’ll for sure want to shantay stay – not sashay away.

When: June 24 – August 31, 2019
Where: Spreckels Organ Pavilion
You’ve never heard classic rock quite like this. That is, on the world’s largest outdoor pipe organ being played by world-renowned San Diego Civic Organist Raúl Prieto Ramírez. The two-hour musical extravaganza starts at 7:30 p.m. in the always picturesque Spreckels Organ Pavilion. Make sure to get there early as last year’s tribute show attracted thousands of attendees.

When: June 29 – November 3, 2019
Where: San Diego Art Institute
San Diego Art Institute likes to push the envelope using contemporary art to illuminate of-the-moment social and cultural issues. Its new exhibit Forging New Territories, which features both established and emerging African American and Latinx artists, does not disappoint. Through cultural storytelling, each artist aims to convey the intricacies of themselves and their communities in visually striking ways. The exhibit runs through Nov. 3.