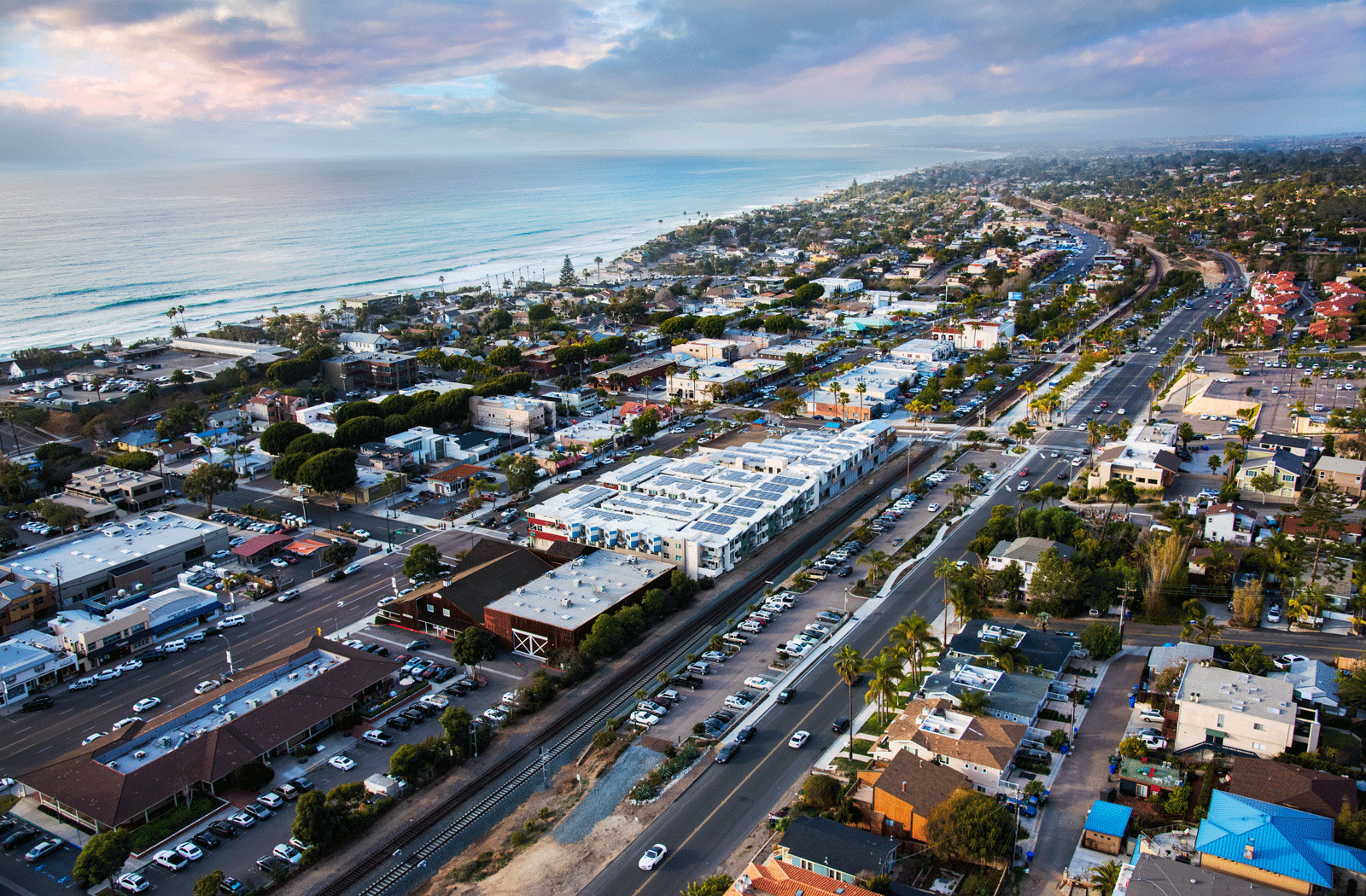 From stunning natural wonders to quirky roadside attractions and a bucolic backcountry with dramatic topography, San Diego’s diverse landscapes and neighborhoods make it the ultimate summer road trip destination. Check out these four epic roadways in San Diego, along with the best places to stop, to live out your SoCal road trip dreams.

Oceanside
A classic beach community. Oceanside marks the beginning of the 101 in the north and is home to some of California’s widest beaches, historical landmarks and a distinct SoCal surf culture.

Carlsbad
The charming “Village by the Sea,” Carlsbad was named after a famous spa in Karlsbad, Bohemia and boasts family-friendly attractions and outstanding shopping.

Encinitas
Known as “Surftown USA,” Encinitas is one of the best surf spots in the world. Beyond surf, this coastal hot spot is also a sanctuary of relaxation and botanic wonders.

Solana Beach
This quaint coastal town lures surfers and beachgoers, as well as art and music lovers and savvy shoppers.

Del Mar
Since the legendary days of Hollywood’s golden years, Del Mar has been the destination of choice for movie stars, as well as fairgoers and those who enjoy betting on the ponies.

La Jolla
Spanish for “The Jewel,” La Jolla is a scenic seaside enclave with a wonderful array of world-class arts and culture, attractions and stunning natural wonders.

Head for the Hills – Highway 80

Traversing 150 miles between San Diego and Yuma, Arizona, Historic Highway 80 winds through the scenic, chaparral-covered rolling hills of San Diego’s East County. Along this nostalgic route there are several charming towns and roadside wonders worth exploring:

Highway 79 begins in the East County town of Descanso and continues 45 miles north to Warner Springs. This road trip is the perfect way to explore San Diego’s charming mountain communities.

Lions, Tigers & Bears
For a roaring good time, head to Lions, Tigers & Bears in Descanso. As a non-profit rescue facility, this animal sanctuary is dedicated to providing a safe haven for abandoned and unwanted animals. It is home to exotic big cats, wild bears and more. The animal reserve allows animals to live out their lives in a safe and caring environment while also educating the public about some of nature’s most magnificent wildlife. Tour reservations are required.

Julian
The quaint mountain town of Julian, founded during the Gold Rush of 1869, is famous for mouth-watering apple pies and cider from local orchards. Stroll along the charming Main Street of Victorian and enjoy Old West architecture. Shop at antique shops, a general store, and dine at country-style restaurants and bakeries. There’s also gold panning at the Eagle and High Peak Gold Mines, wine tasting at Menghini Winery and David Lewis’ fascinating Historical Tours of Julian.

In town for only a day or two and want to see as many sites as possible? Take the 59-Mile Scenic Drive – the ultimate road trip for an overview of San Diego. This beautiful iconic drive is marked every quarter mile by blue and yellow signs depicting a white seagull. The route encompasses a good portion of the city’s most outstanding attractions and neighborhoods. It can be covered in about three hours. Here are some major points of interest along this milestone route:

Embarcadero
The downtown Embarcadero is lined with fun bayfront attractions and activities, including Waterfront Park, the Maritime Museum of San Diego and USS Midway, harbor tours and whale watching excursions aboard Hornblower and Flagship Cruises, and shopping at Seaport Village and The Headquarters at Seaport.