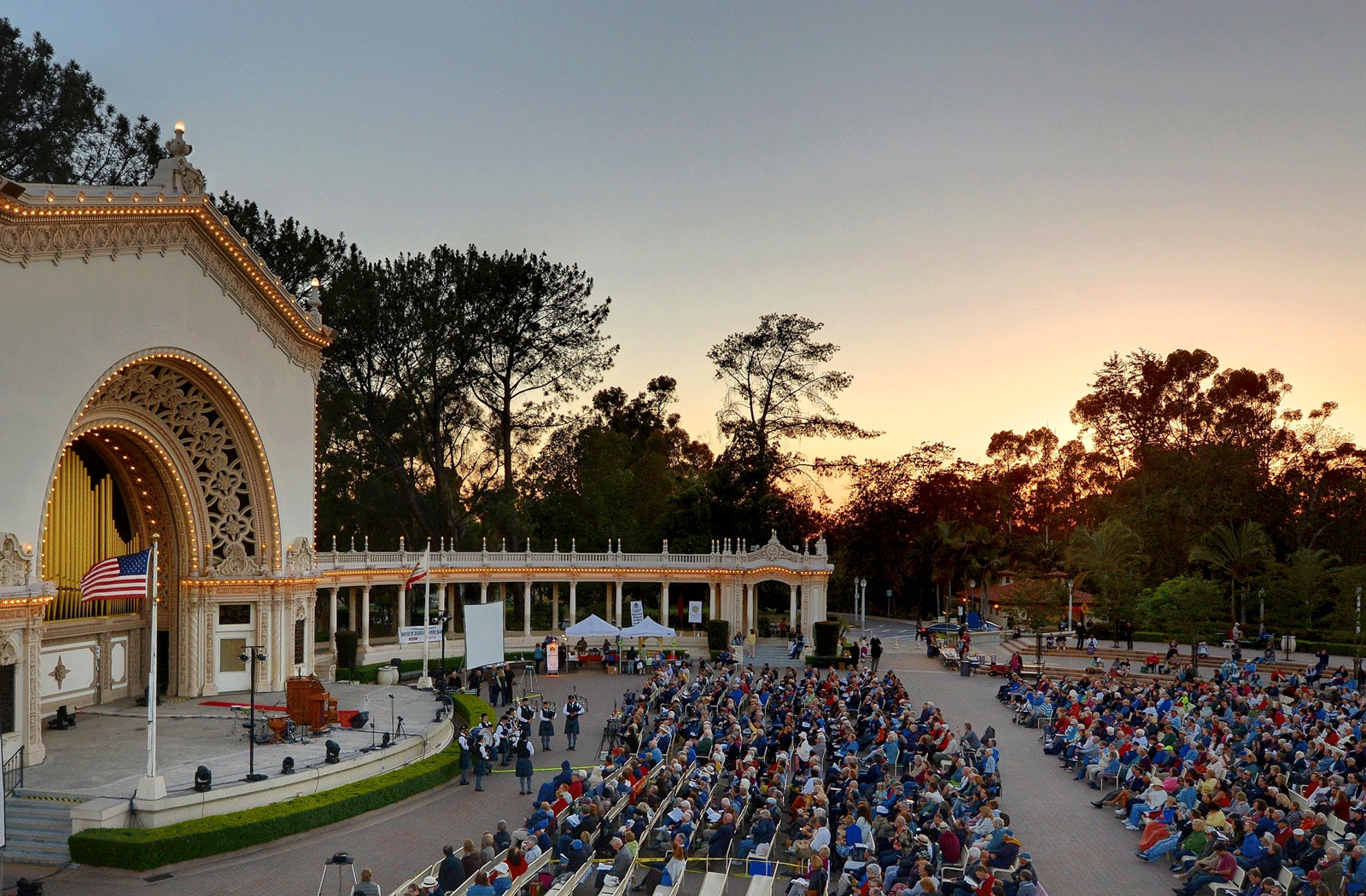 As summer heads into its dog days, the fun also heats up in Balboa Park. From movies on the park’s lush lawns to awe-inspiring concerts on the world’s largest outdoor instrument to festivals celebrating the circle of life to fairy tales taking flight on stage, Balboa Park in August is a fever pitch of festivities.

Where: Spreckels Organ Pavilion
When: Tuesdays through Thursdays
Looking for live music under the stars? Then the Spreckels Organ Pavilion is the place to go and take a listen. For 38 years, Twilight Concerts series has been offering up an eclectic mix of live music from military bands to Dixieland jazz to Big Band swing to Latin salsa. This month, experience the traditional variety with a bit of flair with the addition of genres such as Irish folk, Elvis tributes and tropical rock ‘n’ roll. Concerts take place throughout the whole month of August from Tuesday through Thursday at 6:30 PM. Make sure to check out the official line-up to properly plan your concert experience.

Where: Japanese Friendship Garden
When: August 2-3, 2019
Take a moment to remember those who have passed while savoring the sights, sounds and tastes of Japanese culture at this annual festival. Sponsored by the Japanese Friendship Garden and the Buddhist Temple of San Diego, the annual Bon Odori festival will feature food, a beer garden, a tea and dessert garden as well as cultural performances. On Friday August 2, starting at 5:00 PM attendees can make their own toto nagashi – which translates into flowing lanterns – and are used in the Japanese ceremony where people float glowing paper lanterns to commemorate the dead. Attendees can also purchase lanterns and the floating will take place from 3:00 to 7:00 PM in the lower garden. On August 3 at 4:00 PM, the festival extends out to a lantern-bedecked Spreckels Organ Pavilion. Join in the Bon Odori dance, which will be lead by dancers dressed in traditional kimono.

Where: Fleet Science Center
When: August 3-4, 2019
Your mission if you choose to accept it is to attend the 5th annual Impossible Festival. The festival makes the impossible seem phenomenal with not-to-miss educational experiences. Join the Fleet Science Center and to learn how to make things invisible, experience virtual reality and even levitation. Also, Jason Latimer, curator of Impossible Science for the Fleet, World Champion of Magic, host of SciJinks on Science Channel and judge on Syfy Channel’s magic competition, Wizard Wars, will be in attendance showcasing his jaw-dropping illusions using physics, psychology, chemistry, mathematics and technology.  This year’s impossible mission runs from 11:00 AM to 5:00 PM.

Where: San Diego Museum of Art
When: Thursdays in August
There’s nothing better than the feeling of your bare feet in a lush patch of grass. Better yet, why not add a huge screen and a movie viewing to the mix? You have three chances this month to make this dream scenario a reality with the screening of Spellbound, Black Orpheus and Dracula. Join the Museum of Art for this trio of ominous films throughout the month of August. Get your blankets and popcorn ready for the first screening—Spellbound— on August 15 at 8:00 PM.

Where: San Diego Museum of Man
When: August 23, 2019
It is no secret that secrets are seductive things. Hence the ongoing popularity of Frank Warren’s PostSecret project, which consists of his collection of millions of people’s deepest darkest secrets shared via postcards. Want in on the secret of secrets? Make sure to join Warren and the San Diego Museum of Man for an unforgettable night that will explore the power of secrets. In this interactive presentation, you’ll learn about the inspiration and history of the PostSecret project, listen and share your own secrets, and, of course, have an opportunity to ask Frank Warren questions. This one-of-a-kind experience starts at 6:00 to 8:00 PM in the beautiful Casa del Prado Theatre. Find out more about what this evening entails here.

Fairy Tales in the Park

Where: San Diego Civic Youth Ballet
When: August 17-18, 2019
A summer tradition is making its way back to the park for its 11th annual “Fairy Tales in the Park.” Let the San Diego Civic Youth Ballet take you on a whimsical journey through four timeless fables—Cinderella, Goldilocks, Three Bears and Puss in Boots—as they come to life on stage with the assistance of a professional storyteller leading an interactive experience. Presented in conjunction with the annual ballet is the Fairy Tale Village. The village brings family activities such as face painting, crafts, meet-and-greets, demonstrations and more to life with a fun sustainability theme.

Where: Spreckels Organ Pavilion
When: August 31, 2019
Spreckels Organ Pavilion’s International Organ Festival summer concert series comes to an end with a big (but silent) bang. The Silent Movie Night – one of the most popular concerts of the festival – offers up musical accompaniment by the renowned organist Clark Wilson for two silent movies. The first film—Chasing Choo Choos—culminates in a hair-raising railroad chase that was filmed on the San Diego and Arizona Railway. The second film—Sherlock, Jr.— is a laugh-filled picture about a film projectionist’s dream of being a detective. His skills are put to the test when he is framed for stealing a pocket watch that belongs to his girlfriend’s father. The fun starts with the concert of movie classics beginning at 7:30 PM.