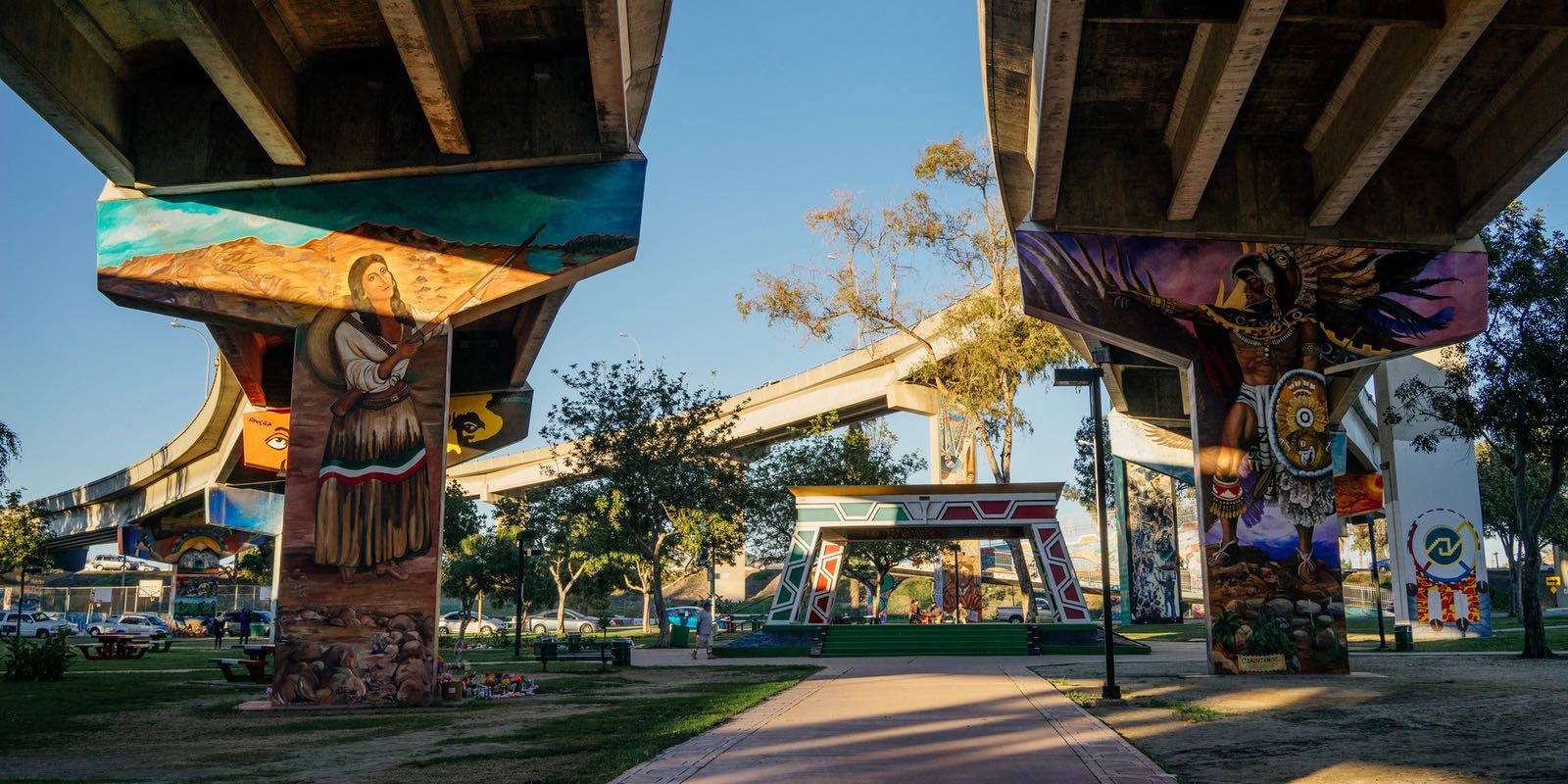 Viewing world-class artwork in San Diego isn’t limited to indoor museums and art galleries. All year round, you can put on your walking shoes and check out San Diego’s many spots for viewing outdoor art. Some of the most striking murals and sculptures can be found along city streets and in neighborhood parks and gardens.

Chicano Park
Barrio Logan’s art scene is one of San Diego’s most intriguing with eye-catching Mexican street art. Established in the early 1970s, Chicano Park was designated a National Historic Landmark in 2017. Barrio Logan residents created the park beneath the San Diego-Coronado Bridge overpass, as part of a community empowerment effort. Today the park is home to more than 80 murals painted on the bridge’s pillars. When visiting, it’s best view the murals in daylight to appreciate their spectacular vibrant colors.

Ladies Who Paint
The first Ladies Who Paint mural festival occurred in October 2019 in San Diego, aiming to positively impact the lives of female and female-identifying artists and neighborhoods around the world. As a result, artists created 12 new murals in downtown’s up-and-coming East Village neighborhood. Femme Petale (1249 F St.) by Niki Zarrabi explores the complex relationship between spirituality and the science of human existence. Because the Voice Called (14th and F streets) by JUURI features a bold, powerful female fighter pilot.

Sea Walls
The Sea Walls: Artists for Oceans global initiative raises environmental issues by “taking the oceans to the streets.”

Nearly 20 murals across San Diego bring awareness to global warming and how it affects our oceans. For instance, CO2 Kills Mermaids (2977 Upas Street, North Park) by Lauren YS is designed to inspire you to choose a climate-friendly mode of transportation like walking or biking. Unknown (5083 Santa Monica Ave., Ocean Beach) by Jason Botkin shows threatened marine species and the impact of offshore drilling.

Murals of La Jolla
More than a dozen artists have transformed the village of La Jolla into an outdoor contemporary art gallery. The Murals of La Jolla feature massive painted and photographic works by local artists and international contemporary art stars. A favorite is Raymond Chandler at the Whaling Bar (1162 Prospect St.) by Raul Guerrero. The mural pays homage to Raymond Chandler’s novel Playback and La Jolla’s iconic La Valencia Hotel. Man, Myth & Magic (7509 Girard Ave.) by Steven Hull depicts a whimsical scene straight out of a carnival. You can tour the Murals of La Jolla with a self-guided map.

North Park
Trendy North Park is home to colorful and quirky outdoor art that can be found on buildings and utility boxes at just about every corner. A local favorite is Love Where You Live (3029 University Ave.) by North Park resident Kim Curran.  This bold and vibrant mural is a reminder for all of us to take pride in the place we call home. Another favorite is You Are Radiant (3803 Ray St.) by Channin Fulton. Channin’s works are “the graphic equivalent of a smile or a hug,” and this fun, colorful mural is certain to put a wide grin on your face.

Queen Califia’s Magical Circle
Queen Califia’s Magical Circle in Escondido is the only American sculpture garden by French-born artist Niki de Saint Phalle. Inspired by California’s mythical, historical and cultural roots, the garden is unlike any other. Nine large sculptures, a “snake wall” and a maze compose this unique site. A mosaic sculpture of Queen Califia standing atop a five-legged eagle sits in the center of the park. Eight large totemic sculptures surround Queen Califia. The sculptures are covered with symbols and forms drawn from Native-American, Pre-Columbian, and Mexican art (and the artist’s own imagination).

Stuart Collection
Located on the campus of the University of California, San Diego in La Jolla, the Stuart Collection is a unique collection of 20 site-specific works by leading contemporary artists of our time. The collection is different from a traditional sculpture garden by integrating some of the works with university buildings and architecture. The popular Fallen Star by Do Ho Suh is a small blue cottage that sits crookedly atop the corner of a 7-story building, as if it dropped from the sky. Another must-see is Niki de Saint Phalle’s colorful and towering Sun God which was her first outdoor commission in America. You can explore the collection with a self-guided walking tour.

Galleta Meadows
You can discover a “Lost World” art display in the Anza-Borrego Desert State Park in rural East County. Galleta Meadows features 40 fantastic metal sculptures of dinosaurs, mammoths, saber-tooth tigers, sloths and other ancient residents, along with life-size animals of the non-prehistoric kind including camels, tortoises and wild stallions. Created by Ricardo Breceda, the unique display tells the tale of San Diego’s fascinating and fossilized past.

Embarcadero
Stroll the Embarcadero along San Diego Bay and enjoy the Port of San Diego’s extensive collection of public art. Many artworks commemorate San Diego’s rich military significance. The most popular is the Unconditional Surrender/Embracing Peace statue, located next to the USS Midway Museum. The statue is a heroically scaled version of the famous World War II photograph of a sailor kissing a nurse at the end of the war in Times Square. Also nearby is the striking, nine-foot black granite obelisk of the Aircraft Carrier Memorial commemorating the U.S. Navy’s aircraft carriers and all who served on them.

Balboa Park
The colorful Spanish Village Art Center in Balboa Park is a collection of three dozen artist studios dotting a cobblestoned courtyard. You can enjoy watercolor paintings, glass sculptures and pottery while meeting many of the local artists who work inside the studios. The outdoor Sculpture Garden of the San Diego Museum of Art is also worth a stroll to view 19th– and 20th century sculpture.

San Diego Airport
Arrive early to the San Diego International Airport to enjoy its large collection of permanent artwork. A favorite is Guillermo by Steve Bartlett, located on the Terminal 1 sidewalk. This stainless-steel sculpture of an abstract man in motion suggests a passenger hurrying through the airport to catch a flight. Another favorite is Charles A. Lindbergh: The Boy and the Man by Paul T Granlund, located on the Terminal 2 west sidewalk, ground level. The two-person sculpture presents Lindbergh at two stages of his life – as a young boy pretending to fly and as an accomplished aviator.