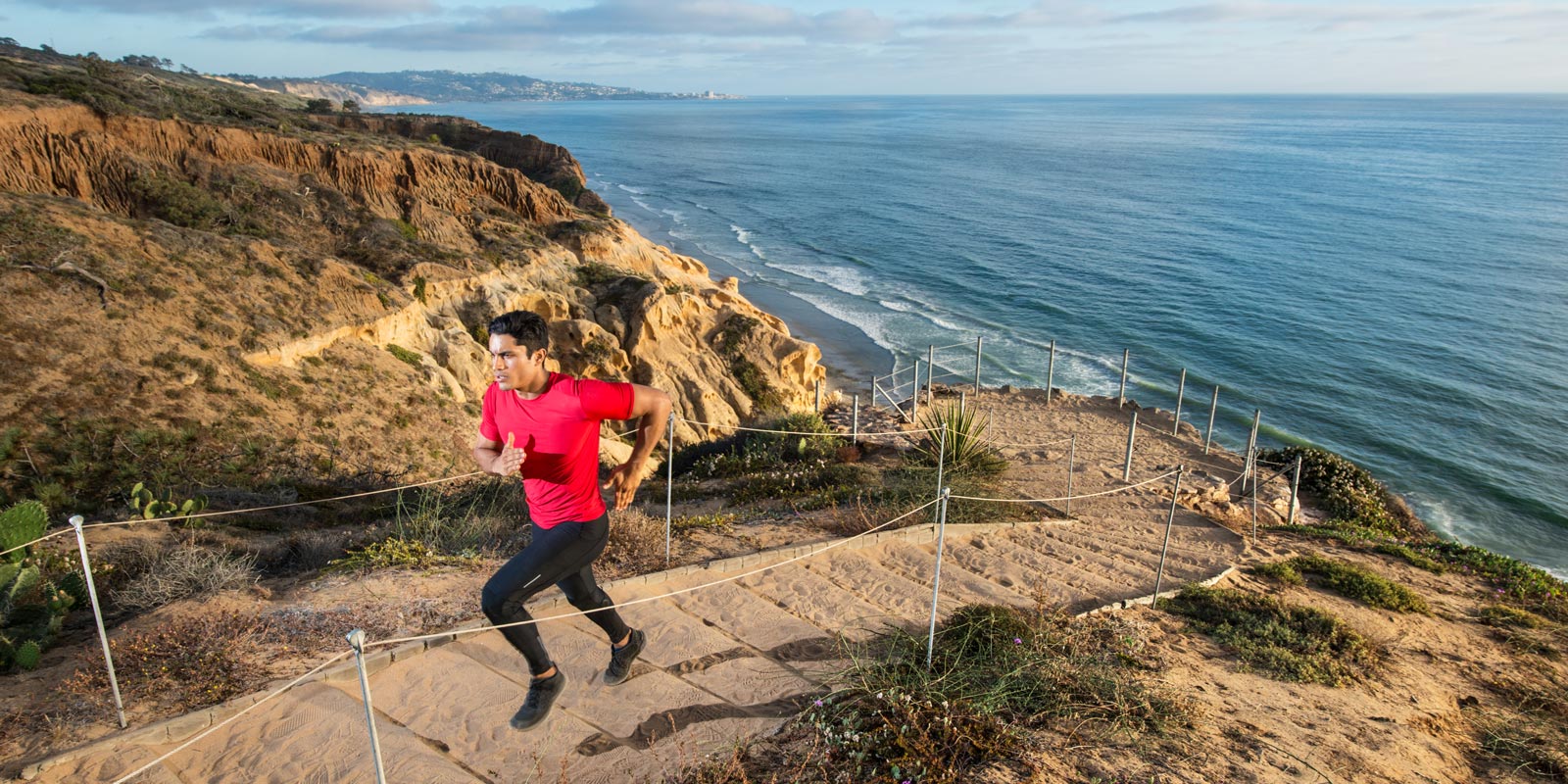 One of the nation’s top cities for outdoor recreational enthusiasts, San Diego has a colorful history as a runner’s paradise. The fun and entertaining Rock ‘n’ Roll Marathon started in 1998 in San Diego, and the world’s first modern triathlon took place in 1974 at Mission Bay’s Fiesta Island.

Seasoned marathoners and triathletes along with casual runners love San Diego’s varied running routes, many with awe-inspiring views. Whether you’re training for a future race or just out for a leisurely jog, below are 7 scenic waterfront routes that will not disappoint.

Start your San Diego running adventure with the Mission Bay loop, a local favorite. You can log approximately 8 miles starting at Mission Bay Park and running past Fiesta Island, SeaWorld San Diego and different sections of scenic Mission Bay, with a nice mix of grass and bike paths. Want to capture the spirit of San Diego’s first triathletes? Circle around the four-mile loop at Fiesta Island, offering a flat pathway perfect for runners of all levels.

Check out San Diego’s lively beach scene while running along the Mission Beach-Pacific Beach boardwalk. Start at the South Mission Beach jetty. Head north along the oceanfront pedestrian walkway that runs approximately 3 miles to the end of Law Street in Pacific Beach. On the return to South Mission, run at a slower pace to take in the local surf culture. You’ll pass popular bars, restaurants and surf shops along the way. Refresh afterwards with a local craft beer and great burger at Draft or the legendary Lahaina Beach House while watching other runners pound the pavement.

Jog along lesser-known Sunset Cliffs between Ladera and Adair streets for a 2-mile stretch of breathtaking ocean views. Watch daring surfers ride the waves at one of San Diego’s more challenging surfing areas. Sunset Cliffs is known for big swells and breaks near the rocky cliffs below. Add on another 1-2 miles heading north along Sunset Cliffs Boulevard into neighboring Ocean Beach where you’ll find a colorful 1960s-era beach culture. Make your way to the Ocean Beach Pier, the second longest pier on the West Coast, before heading back to Sunset Cliffs.

Get in a good workout while enjoying beautiful San Diego Bay views along downtown’s Embarcadero. Lace up your shoes at the San Diego Convention Center for an approximate 5-mile run along the scenic bay past Seaport Village and the USS Midway Museum. Turn around at the historic Maritime Museum of San Diego and then head back to the convention center. Want to finish your run in Hollywood style? Sprint up the 100 steps of the convention center and feel like Rocky Balboa.

If you need to log long distances, enjoy the approximate 9-mile Silver Strand trail between Coronado and Imperial Beach along a portion of the Bayshore Bikeway. Runners and cyclists share the pathway paralleling the beach and San Diego Bay. This trail is considered one of the most beautiful routes in Southern California. Need more distance after returning to Coronado? Head toward Coronado Beach to run along one of the most beautiful beaches in the nation. Make certain to check out some of Coronado’s spectacular oceanfront homes along the way.

Head inland to Mission Trails Regional Park and check out the popular Lake Murray Trail. Flat, paved and perfect for all skill levels, run the 6-mile round-trip trail that horseshoes picturesque Lake Murray. Watch families fishing and boating along the waters and picnicking and barbecuing along the way. After your run, you could always change gears and hike one of the nearly 65-miles of trails at Mission Trails Regional Park.

End your San Diego running adventure with panoramic views of popular North County communities while running the 5-mile loop around scenic Lake Miramar. With every mile marked, you know your distance without a GPS watch and can enjoy the route’s spectacular views and scenery. Bring along your dog who can pace along while on a leash. Pack a snack or picnic meal for a well-deserved, post-run celebration in this popular recreational area.