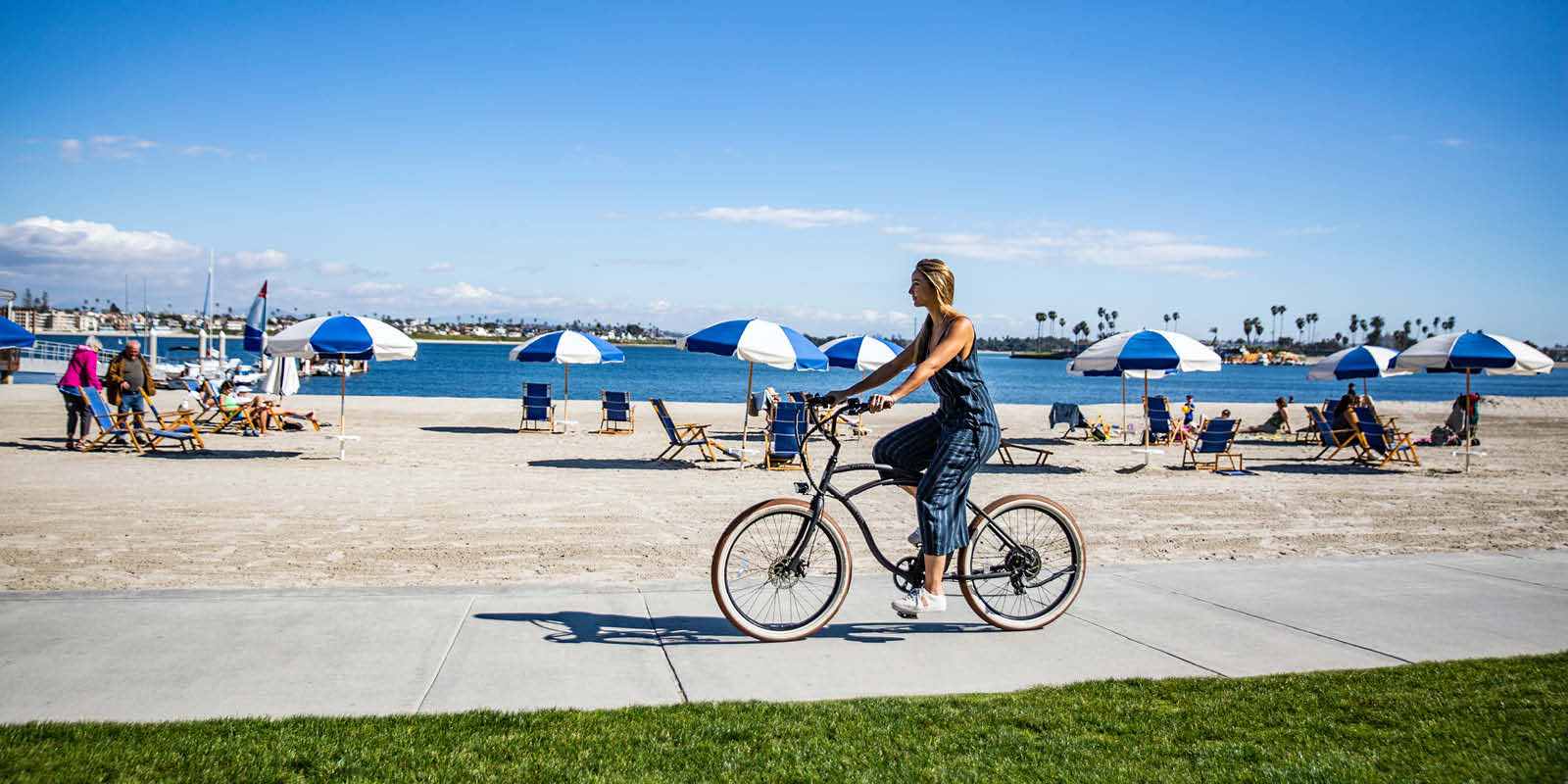 Biking around San Diego on an electric bike can be lots of fun. Tired of pedaling? Turn on the battery and let the motor do the work for you. Limited on time? An electric bike also provides a great way to travel more distance in less time. Never been on an electric bike? Think of it as a bike that turns into a moped or a scooter. Just hop on, determine your direction, and embark on a fun-filled ride with family and friends through the sites of San Diego.

You can enjoy a variety of guided and self-guided tours around San Diego on an electric bike. Below is a list of 7 great biking routes and places to see along with electric bike rental shops and tour companies to assist on your next San Diego adventure.

Cruise along the 27 miles of winding, paved bike paths that circle Mission Bay for family bike rides, leisurely biking and sightseeing. Bike around Fiesta Island, past SeaWorld San Diego and through scenic parks all with breathtaking water views. You can pick a range of distances along the bay or branch off on side trips to the nearby Pacific Beach–Mission Beach boardwalk, Ocean Beach and Mission Valley. View an array of wildlife including rare species of birds while biking along the San Diego River Trail. It’s a network of paths along the San Diego River channel that passes through Mission Valley.

Take in the sites of Balboa Park, neighboring Mission Hills and Old Town San Diego on a guided electric bike tour. See beautiful historical homes, scenic canyons, and hidden footbridges that many local residents don’t even know about. Start at the historic carousel in Balboa Park, the largest urban cultural park in the nation. Ride amid the park’s spectacular architecture and gardens and end in Old Town San Diego. The tour takes approximately two hours.

Local experts at Where You Want to be Tours will take you on guided, electric bike tours where the guidebooks don’t. Choose from a variety of tours including the Balboa Park and Mission Hills Bike Tour (Zoo to Blue). The fun-filled and informative rides are designed for all skill levels.

3. Downtown and The Embarcadero

Spend the day riding around downtown and the scenic Embarcadero on an electric bike. Start near the Maritime Museum of San Diego and glide past the USS Midway Museum, Seaport Village, Embarcadero Marina Park North and Embarcadero Marina Park South, and the San Diego Convention Center. Cruise through downtown’s vibrant neighborhoods including East Village, the historic Gaslamp Quarter and colorful Little Italy. End your journey at Waterfront Park, located across the from the Maritime Museum, to watch the sun set over San Diego Bay.

Rent bikes at Wheel Fun Rentals, located along the Embarcadero near the Maritime Museum. Riders must be 16 years or older, and hourly, half-day and full-day rentals are available. Helmets and bike route maps are also provided.

Coronado is a biker’s dream regardless of whether you’re pedaling or sitting back and taking in its unique character. Bicycle the relatively flat, mile-long “island” and see the famous Hotel del Coronado, beautiful homes with manicured gardens, and Coronado Beach. It is often rated one of the best beaches in the nation. Cruise the Silver Strand, an easy 10-mile ride between Coronado and Imperial Beach along a portion of the Bayshore Bikeway. You will bike parallel to the ocean and scenic San Diego Bay along this route, which is often referred to as the most beautiful and cyclist-friendly bike route in Southern California.

An electric bike rental at Bike and Kayak Tours Coronado includes a helmet and water bottle cage. For a self-guided tour, you also get a custom illustrated bike map highlighting scenic spots, photo opps, great sights, and, of course, bike paths and bike-friendly roads around Coronado.

Embark on a self-guided tour of the Bayshore Bikeway, a 25-mile ride along San Diego Bay. Cruise along bike lanes or separated bike paths with diverse scenery en route. Start at the Embarcadero in downtown and head south through National City and Chula Vista. Loop around San Diego Bay into Imperial Beach and then catch the Silver Strand into Coronado. Sites along the way include the U.S. Naval Amphibious Base (where the Navy SEALs train), beautiful Silver Strand State Beach,  and the San Diego Bay National Wildlife Refuge. Hop on the Coronado Ferry with your bike to cross over San Diego Bay back into downtown.

Rent your electric bikes at Pedego Electric Bikes in downtown. Locks and helmets are included with every rental, and the friendly staff will teach you how to use electric bikes with safety training and fitting before departure. The self-guided Bayshore Bikeway tour can take 1.5-3 hours.

Discover the charming oceanfront community of Carlsbad, located along San Diego’s picturesque North County coastline. Ride your electric bike alongside historic Highway 101 where the iconic route hugs the Pacific Ocean. Rest halfway at Lookout Point, a bluff high above the ocean’s edge where you’ll view the waves crashing on the rocky beach below. This a great surf spot, so you can see skilled surfers ride the challenging waves. And if you’re lucky, you might also see some dolphins or whales passing in the ocean waters.

Take a guided 2-hour Carlsbad Coastline Tour with Pedego Electric Bikes Carlsbad. Your guide will share fun Carlsbad facts, and all riders must have an intermediate level of riding ability. Other North County electric bikes tours available include Oceanside and the Batiquitos Lagoon.

Bike through luxurious La Jolla, referred to as San Diego’s “Jewel by the Sea” and for good reason. Take in the spectacular scenery as you cruise along beautiful La Jolla Cove, Ellen Scripps Browning Park, the Children’s Pool, and La Jolla Shores beach. Your electric bike will come in handy to climb the hills to Mt. Soledad National Veteran’s Memorial where spectacular views await. Or head north of the “village” to Torrey Pines State Natural Reserve and the Torrey Pines Gliderport, where you can watch colorful paragliders float above dramatic 300-foot cliffs and the Pacific Ocean below.

Rent you electric bike at San Diego Electric Bikes, located in the heart of La Jolla. Reservations are recommended and available to start at 10:00 AM, 10:30 AM, or 11:00 AM. Same day rentals are on a first-come, first-serve basis only.

Explore the vast Anza-Borrego Desert State Park in East County San Diego on an electric bike. Discover Galleta Meadows, a “Lost World” art display, featuring 40 fantastic metal sculptures of dinosaurs, mammoths, saber-tooth tigers, sloths, and other ancient residents. You’ll also find life-size animals of the non-prehistoric kind including camels, tortoises and wild stallions. Experience the geological wonderland of the Fish Creek drainage. Ride back through time and discover the fossil evidence of a long-lost sea. You’ll also be treated to spectacular desert panoramas along with beautiful displays of springs wildflowers during the season.

Bike Borrego in Borrego Springs in the Anza-Borrego Desert specializes in guided e-bike tours and rentals. With desert temperatures heating up, tours are closed for the summer season. Reserve your spot for an e-bike tour when back in cooler temperatures, beginning in October.