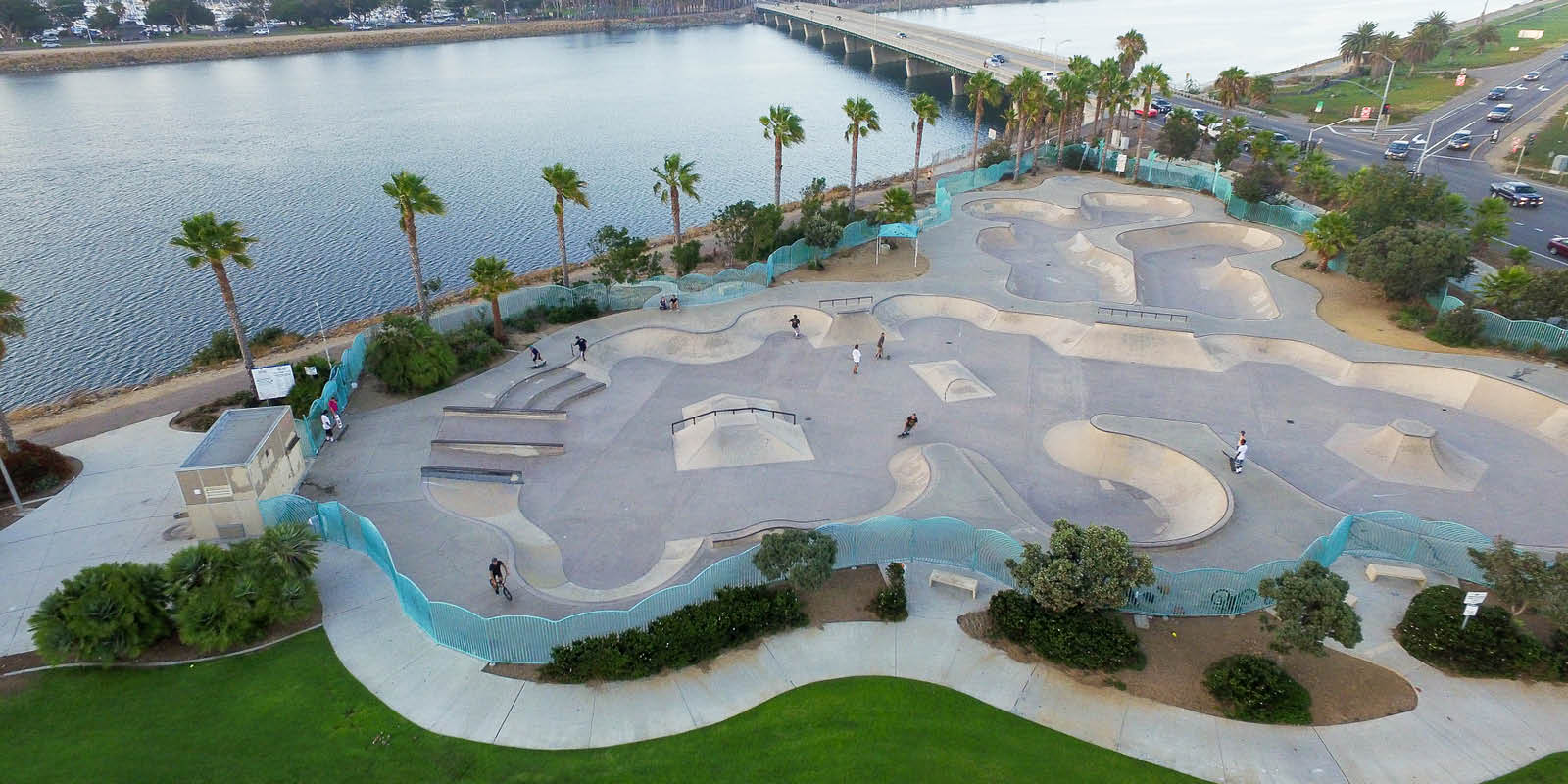 As the Summer Olympics get back on board in Tokyo, you can go for gold-medal stoke right here in San Diego with two of the newest Olympic sports, skateboarding and surfing. A skateboarding mecca and world-class surfing destination, San Diego is an ideal place for beginners to learn how to launch big airs or perform sick tricks on a deck.

Here are some local skateparks and surf schools where you can get started on shredding like a pro, as well as take part in fitness-focused adventures that connect amateur Olympians with pro surfers and skaters for the ultimate, Olympic-sized San Diego sports experiences.

With 70 miles of beaches, a wide variety of waves and world-renowned surf breaks like Swami’s and Trestles (both featured in the Beach Boys song “Surfin’ USA”), San Diego has long been a surfing paradise. Just ask local legendary surfer and San Diego ambassador Rob Machado. Groms (novice surfers) of all ages can “shaka” too at several beginner breaks including La Jolla Shores and Tourmaline Surf Park, with their gentle waves and sandy bottoms. Some surf outfits that can get guests riding like an Olympian in no time include:

Where: 2261 Avenida de la Playa, La Jolla, CA 92037
New to surfing, or just want a refresher? No problem! Everyday California‘s experienced instructors will teach you the fundamentals of surfing and ocean safety on land, before heading into the calm waters of La Jolla Shores to catch some waves with one-on-one or group surf instruction, tailored to everyone’s skill level.

Where: 4121 Mission Blvd, San Diego, CA 92109
Offering lessons to experienced and inexperienced surfers of all ages in the mellow surf off Mission Beach, Pacific Surf School boasts expert instructors under the guidance of Emiliano Abate, a 20+-year veteran of the professional surfing circuit.

Just Need a Board?

Cheap Rentals in Mission Beach has been named named “Best Surfboard Rental Shop in San Diego” by leading local publications such as San Diego Magazine and the San Diego Reader. Get everything you need for a surf session with board rentals starting a $7 an hour.

SurfUp surf rental stations bring the start of your journey closer to the shore. Simply download the SurfUp app and scan a QR code at a nearby SurfPod to rent a surfboard! It’s a hassle-free, grab-and-go pit stop on your way to the beach. The SurfPods currently offer beginner surfboards for fun waves.

For surfers who want to rip the waves like a medalist, Fit City Adventures offers Surf Like a Pro, a once-in-a-lifetime day of surfing with Damien Hobgood, a pro surfer on the World Championship Tour and Surfrider Pro Team. This ultimate surf clinic includes learning the basics of surfing, shaping a surfboard to take home. Wrapp up the day noshing on delicious local fish tacos and craft beer. Participants also receive some cool SoCal swag.

Home of the West Coast’s first skatepark in Carlsbad (1976), skateboarding legends like Tony Hawk and Shaun White, and some of the biggest names in skateboard manufacturing such as Gordon & Smith and Sector 9, San Diego prides itself as a birthplace of skateboarding. And according to USA Skateboarding, eight of the team skateboarders are from San Diego!

Choose from more than 35 skateparks to check out the world’s best skaters in action and learn how to shred like a pro. Some standouts include:

Where: 2525 Bacon St, San Diego, CA 92107
The first skatepark built by the City of San Diego, the 40,000 square foot Robb Field Skate Park in Ocean Beach was designed with input from top local skaters such as Tony Hawk.

Where: 200 Saxony Rd, Encinitas, CA 92024
Skaters of all ages and skill levels enjoy Magdalena Ecke Family YMCA Skate Park in Encinitas featuring an 80-foot vertical ramp from the 2003 X Games, group and private lessons and a Mini-Land perfect for beginners. Tony Hawk and Shaun White are two of the most famous local pro skaters who practice here.

Where: 3401 Clairemont Dr, San Diego, CA 92117
The 60,000 square foot Krause Family YMCA Skate Park in Clairemont offers something for all ages and skill levels including the skatecross course designed by pro skater Andy Macdonald. Both the Krause and Ecke skateparks offer group and private lessons.

Where: Dewey St & Newton Ave, San Diego, CA 92113
Catch some air at the Chicano Park Skatepark – a unique skatepark under the Coronado Bay Bridge with ample space and features set amongst the famous Chicano Park murals!

Meet the world’s best skaters, coaches, trainers and judges at the new California Training Facility (CA|TF) in Vista, the world’s first and only high-performance center developed explicitly for skateboarding. Designed and programmed to empower athletes and support their mission to become Olympic medalists, the state-of-the-art facility features full-size competition street and park courses, like those in Tokyo for the Olympic games. Visitors can schedule private coaching lessons, as well as join weekly Open Skate and Family Sessions for all ages and skill levels.

Additionally, Fit City Adventures offers a Skate Like a Pro experience where guests can join longtime pro skater Ryan Gallant, founder of the Visit Skateboarding company, to learn the basics and more at skateparks throughout San Diego’s North County.