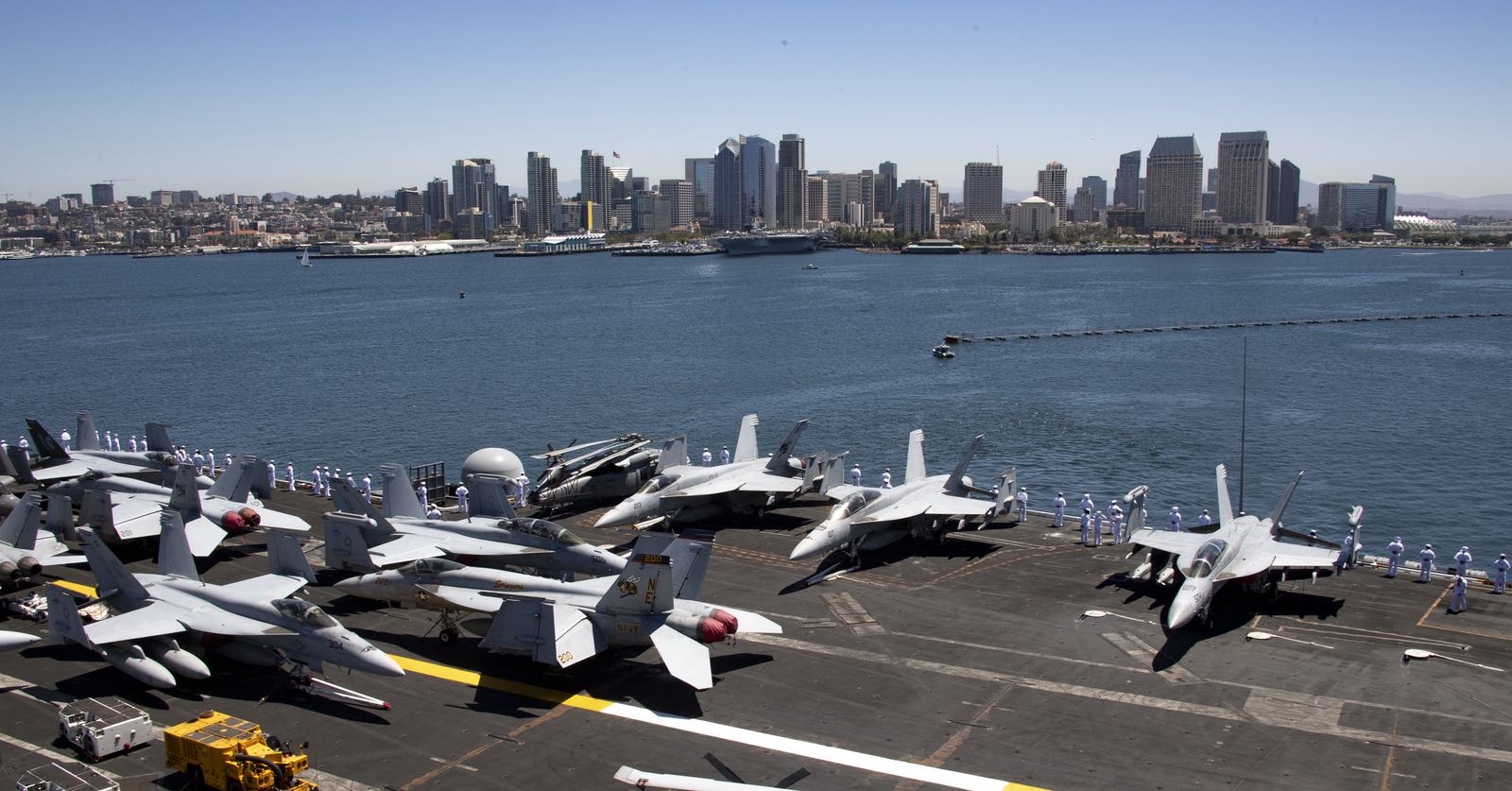 It’s only taken three decades, but “Top Gun: Maverick” – the sequel to that ‘80s movie megahit “Top Gun” — finally hits theaters on May 27. And if you’re a fan of the franchise and its deep San Diego links, you’ll feel a need to speed to these local sites that loom large in the original movie’s legend. So strap in, make like Maverick (the films’ fighter-pilot hero, played by Tom Cruise) and get jetting to these famed San Diego shooting locations. You are cleared for takeoff.

Where: Miramar Way, San Diego, CA 92145
Formerly Naval Air Station Miramar, the base in northern San Diego was once home to the Navy Fighter Weapons School — aka “Top Gun,” the inspiration for the movie. The school may have moved but the base opens its gates Sept. 23-25 for the Miramar Air Show, billed as the largest military air show on the planet.

Where: 2223 El Cajon Blvd., San Diego, CA 92104
You’ll remember this spot at the Lafayette Hotel as the stand-in for the officer’s club bar where Maverick serenaded his squeeze-to-be, Charlie, with the Righteous Brothers’ “You’ve Lost That Lovin’ Feelin’.” Fun fact: The room has hosted numerous celebrities over the years, and at the time of the “Top Gun” shooting was serving as a new-wave dance club called Roxy West.

Where: 102 Pacific Street, Oceanside, California, USA
The 1887 Victorian cottage that served as Charlie’s beachside abode has been converted to a just-opened Oceanside pie shop called HIGH-pie, after being moved around several times over the years.

Where: 600 W Harbor Dr., San Diego, CA 92101
This San Diego stalwart near the Downtown waterfront was the setting for a memorable scene that had Maverick and his pilot pal Goose performing “Great Balls of Fire.” Goose’s piano is still there, amid lots of other “Top Gun” memorabilia adorning the walls of Kansas City Barbeque.

Where: 3115 Ocean Front Walk, San Diego, CA 92109
This historic pool’s locker room was the setting for a tense locker-room confrontation in the movie. The Plunge, newly renovated, is now open again as part of the Fit Athletic Club at Belmont Park.

Where: 1800 Cabrillo Memorial Dr, San Diego, CA 92106
This sprawling property at the tip of Point Loma served as the home of “Viper,” the commanding officer of Top Gun in the movie. These nice digs are best seen from Cabrillo National Monument or by boat sailing around the tip of Point Loma.

Where: 2640 Historic Decatur Road, San Diego, CA 92106
The former Naval Training Center in Loma Portal had some fleeting scenes in the original film. The historic installation has since been transformed into the cultural and culinary hub known as Liberty Station.

Sites to see from the sequel:

Where: 910 Harbor Dr, San Diego, CA 92101
This historic aircraft carrier, now a massive museum on San Diego’s Embarcadero, hosted the splashy world premiere of “Top Gun: Maverick” earlier in May — complete with an appearance by Tom Cruise, who arrived at the ship by helicopter. (Other premiere events took place on Coronado and at Downtown’s Civic Theatre.) The USS Midway Museum, a floating city at sea, is a place that real-life counterparts to Maverick, Goose and Iceman called home. Now you can explore the ship’s galleys, sleeping quarters, the 4-acre flight deck and more. Admission to the Midway Museum includes a self-guided audio tour to over 60 locations, from the engine room to control tower, narrated by Midway sailors who lived or worked in each.

This naval base on the island of Coronado is showcased in scenes from the new movie. While base access is limited, you can see its aviation activity from plenty of great vantage points all around San Diego Harbor. Top picks include the public Coronado Beach to the south of the base, as well as the elevated vantage points at Cabrillo National Monument.

Where: 2001 Pan American Plaza, San Diego, CA 92101
While it wasn’t in the movie, you can take a trip through aviation history with a visit to the San Diego Air & Space Museum. The Balboa Park museum houses a collection of historic aircraft and spacecraft from all over the world. Don’t miss the flyable replica of Lindbergh’s Spirit of St. Louis. And check out the actual Apollo 9 Command Module spacecraft and the only real GPS satellite on display in the world.