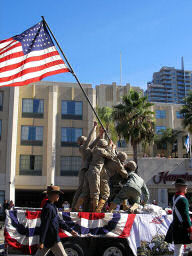 Veterans Day falls on November 11, the anniversary of the Armistice of World War I — not a great battle but an achievement of peace.  Each year, San Diego honors United States veterans with the San Diego County Veterans Day Parade taking place downtown on Pacific Highway beginning at 11:00 A.M.  Everyone is invited to come and see one of San Diego’s most spectacular parades.

After the parade, you can visit the U.S.S. Midway Museum and watch as its newest addition — a restored World War II Corsair fighter plane — is lifted onto the fight deck.  Veterans will receive free admission to the museum and $1 from every ticket sold that day will be donated to the Veterans Village of San Diego.

While you’re there, check out the collection of military memorials along the bay, between the U.S.S. Midway and Seaport Village.

Building on the spirit of the occasion, LEGOLAND California has recreated the Vietnam Veterans’ Memorial in miniature.  The mini-memorial is situated in the park’s  Miniland, between the mini Lincoln Memorial and the mini Washington Memorial, just like the real thing in Washington, D.C. 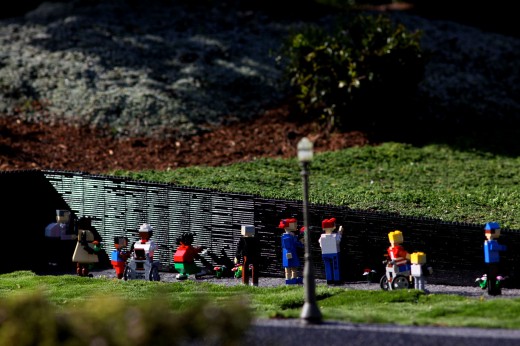 Also in honor of Veterans Day, Old Town Trolley Tours of San Diego will treat all veterans — active duty, retired, and honorably discharged — to an entertaining and enlightening city sightseeing tour on Wednesday, November 11.  Just bring your valid ID card showing active duty or retirement, or a DD214 (proof of release from the military), to any Old Town Trolley booth for your complimentary boarding pass.

And just so you know, the world-famous San Diego Zoo offers free admission all year round to active duty military personnel (U.S. and foreign) with valid military ID. Spouses and dependents receive 10% discount on the Best Value Admission, which includes bus tour and Skyfari aerial tram.