Get ready for the ultimate family vacation! During the entire month of October, kids eat, stay and play for free throughout San Diego. Take advantage of great deals at over 100 participating partners including Amtrak, world-class attractions, museums, hotels, restaurants, surf companies, tour companies and more.

Summer in San Diego means sunshine, beaches and barbecues. During your visit this summer, why not check out some of the awesome new offerings at San Diego attractions, including roller coasters, battling pirate ships, chinese acrobats and more!

Learn more and grab a $10 off coupon after the break.

The combination of dazzling fireworks, bubbly drinks, noise-makers, poppers and staying up late makes New Year’s Eve a holiday everyone loves. While many NYE events are adults only, there are plenty of great events that kids of all ages can enjoy.

Curb your craving for snow in San Diego! SeaWorld and Legoland feature daily made fresh snow for wintery fun in the sun. Leave a comment after the break by noon on Friday (12/9/11) for a chance to win 2 SEALIFE hopper passes good for entry into LEGOLAND and SEA LIFE!

Spend your Thanksgiving Day weekend enjoying one of these five great activities throughout San Diego! 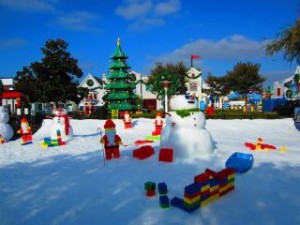 I know where we will be during the next month! LEGOLAND is pulling out all the holiday cheer and will be celebrating with its biggest, brightest and coolest celebration ever with Holiday Snow Days. The celebration begins November 19 when the snow “falls” for the first time ever at LEGOLAND and continues with the lighting of the world’s largest LEGO Christmas tree and concludes with the annual Kids’ New Year’s Eve Party.