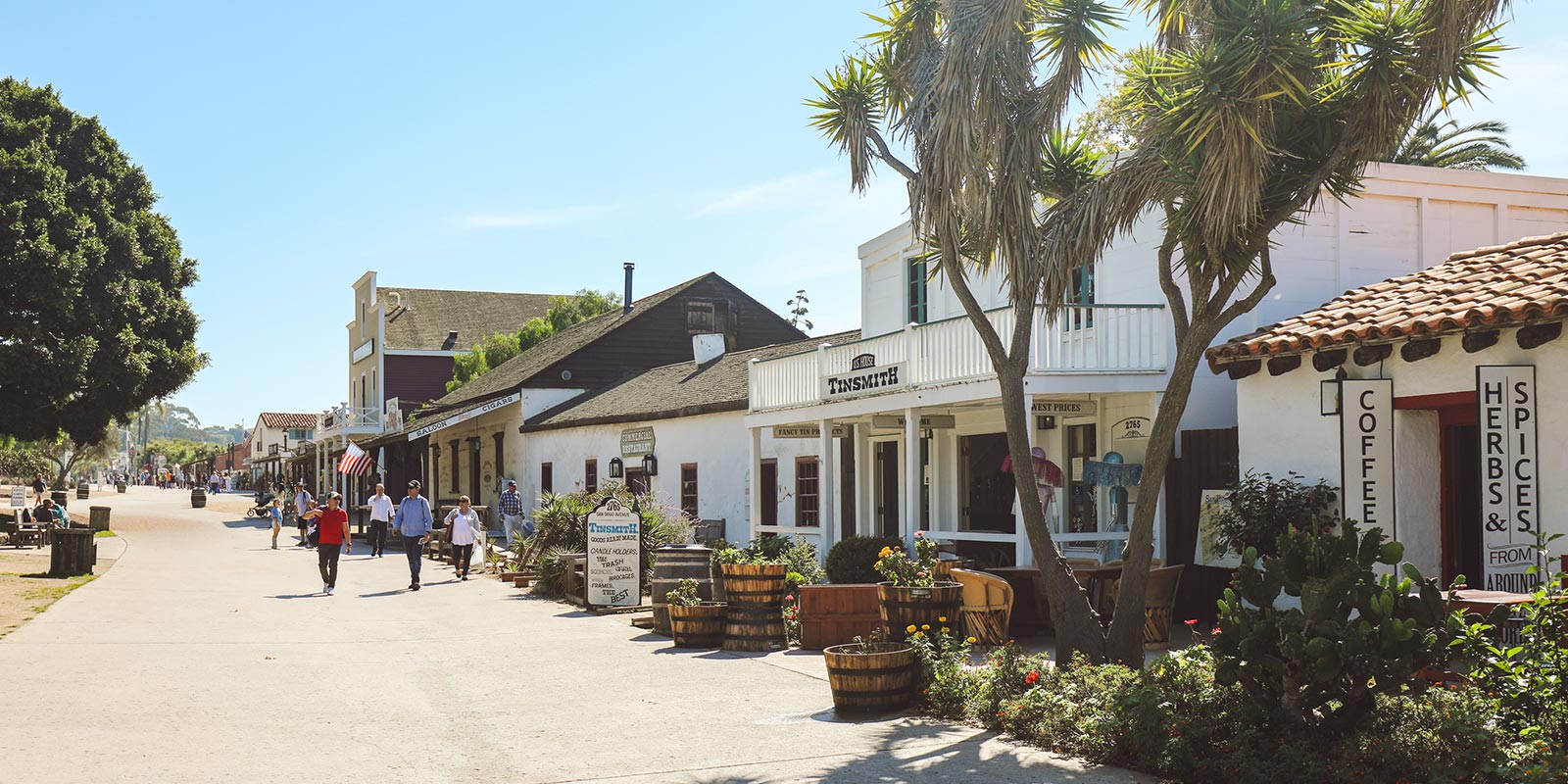 This is where it all began—not just the city of San Diego but the modern history of what we know as California. On the hill just behind Old Town, the Spanish built the first mission in what is today the Golden State. By the mid-1800s, Old Town was as happening as anywhere in the West. Reminders of its heyday—and its Spanish, Mexican, and American influences—are found everywhere. Walk among the restored buildings and you can hear mariachi music, see traces of the Old West, and happen upon a ghost or two. (Paranormal experiences are said to abound here). Intermixed with numerous historical sites are scores of specialty shops, dozens of restaurants, art galleries, one hidden bar, and endless surprises in this ever-relevant district.

Where: 2414 San Diego Avenue, San Diego, CA 92110
More akin to the refined eateries of Little Italy than the family-style restaurants that dominate Old Town, this elegant establishment serves Oaxacan classics like mole alongside barbacoa and tacos. Try a mezcal cocktail with dinner or adjourn to the dedicated tasting room, home to one of the largest selections of the agave spirit in the United States.

Where: 2727 Presidio Drive, San Diego, CA 92103
Presidio Hill, standing just behind Old Town, is among the most important historical sites in California. This is where, in 1769, the Franciscan monk Father Junípero Serra built the first mission in what is today California—the first permanent European settlement on the West Coast. Serra located the mission here because the hilltop granted a view of both the ocean and the bay, the nearby San Diego River provided fresh water, and Old Town was then a village of native Kumeyaay people the Spanish sought to convert.

The mission eventually relocated 7 miles to the east, but the hill remained a critical military garrison for every empire that would lay claim to California. The Mission Revival-style building, constructed in 1929, and the museum exhibits inside, recently underwent extensive renovations. Both for the history and the sweeping views, a visit to museum is well worthwhile.

Where: Old Town San Diego State Historic Park, San Diego, CA 92110
Instantly step back into the mid-1800s. The buildings here are restored and reconstructed to mimic the neighborhood at its most vibrant. At various points in history, Old Town has been home to the native Kumeyaay people, Spaniards, Mexicans, and Americans. To learn more about the fires, earthquake, and smallpox epidemic that shaped this place, take a free walking tour, offered daily at 11:00 AM and 2:00 PM.

Where: 2720 Calhoun St, San Diego, California 92110
Take a snack break with fresh Bavarian pretzels and prickly pear lemonade in the shady yard of this rustic establishment. Grab some licorice, chocolate, or spicy cheese nuggets for the road.

Where: 2754 Calhoun St. Suite A, San Diego, CA 92110
Every day is Día de los Muertos at this artsy boutique. Find all the handmade calaveras, bags, jewelry, clothes, and other gifts you need to bring loved ones back home.

When: 4133 Taylor St, San Diego, CA 92110
Mexican and Latin American books, clothes, folk art, jewelry, and much more. All of it bursts with color and begging for a spot in your home.

Where: 2660 Calhoun Street, San Diego, CA 92110
This restored 1870s hotel, a national historic landmark, affords a taste of Old Town’s heyday, albeit with modern comforts. The restaurant’s contemporary menu features entrees like chicken and churros, short ribs and chili rellenos. Take in Old Town from the wrap-around second-story balcony, from which guests have witnessed weeklong dance parties and even brutal bull-and-bear fights (both of which were all the rage in the late 1800s).

Where: 2476 San Diego Ave, San Diego, CA 92110
Built in 1857, this was San Diego’s first two-story brick building. It housed the first commercial theater as well as a granary and courthouse. History haunts this property in the form of ghosts of the house’s former inhabitants who reputedly never left.

Map of a Day in Old Town