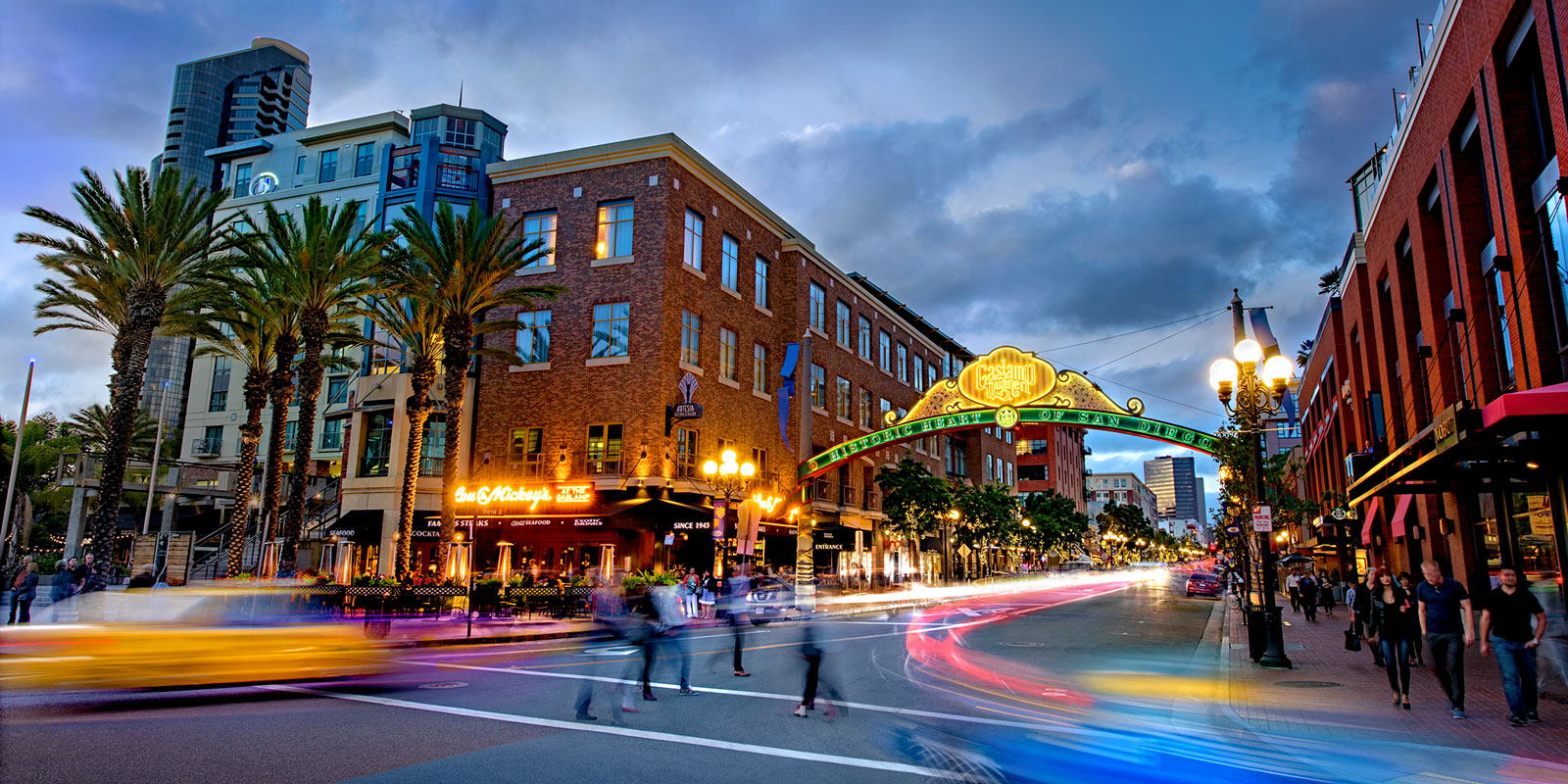 Downtown San Diego, with its dramatic skyline of high rises juxtaposed with historic buildings and set on San Diego Bay and nearby Balboa Park, encompasses so many things about the region: art and architecture, nautical history and fishing fleets, world renowned beer and delicious eats. It would take a lifetime to fully explore. But downtown is always good for a day trip packed with a bit of everything.

For a quick Java, hit James Coffee in Little Italy, located inside a shared space alongside boutiques and a barbershop. For something a bit more lavish brunch, check out the delicious—and very Insta-genic—new hotspot Morning Glory.

Grab your flight jacket and step aboard the USS Midway Museum, the largest museum dedicated to naval aviation. This decommissioned aircraft carrier, which was in service from the Cold War-era until Desert Storm, is home to 30 actual and replica aircraft that the ship carried, including the same type of jet featured in the movie Top Gun. Kids and grown-ups can climb into cockpits and up into the ship’s flight deck or watch a film about the carrier’s days at sea. The nautical experience continues aboard the Star of India or other vessels included in the nearby Maritime Museum of San Diego.

Balboa Park, the nation’s largest urban park, is the art and cultural hub of San Diego. Inside are no fewer than 16 museums and the world-famous San Diego Zoo. Science and nature buffs of all ages will have a field day at the Fleet Science Center and the San Diego Natural History Museum. Working up an appetite? No problem. Sit down for a formal lunch at The Prado at Balboa Park. Or for a more casual bite, head to Panama 66, an open-air restaurant and bar where the sculptures of the adjacent Marcy S. May Sculpture Garden are practically dining companions. Cue cuteness overload. Time to visit the 3,500 animals at the legendary San Diego Zoo. From leopards and anacondas to arctic foxes and koalas, they’re all here waiting to wow the whole family.

Cruising and spending the day on the water seem more like your style? Stay by the bay and arrange for a 90-minute SEAL Tour. Marine mammal lovers will want to sign up for a whale- and dolphin- watching tour with Hornblower Cruises. Or hop aboard a Flagship Harbor Cruise for a relaxing day on the bay. Grab a quick bite at Carnitas Snack Shack, just steps from the Midway, or nearby at The Crack Shack.

Take a walk around downtown to find food options from all over the world within a few square miles. For upscale burgers and posh takes on American classics, head to Searsucker San Diego in the heart of the Gaslamp Quarter. Seafood lovers can head to Ostera or The Fish Market for fresh catches and high-quality local flavors. Wander close to the water and you’ll find the delightful Seaport Village, home to waterfront shopping and dining – not to mention tons of charm and character. After dinner, head to one of several dessert shops to quell your sweet tooth.

After hours, the action is in downtown’s historic Gaslamp Quarter. Take the elevator up 22 stories to Altitude Sky Lounge, where cocktails come a view of Petco Park (regarded as one of the finest MLB stadiums) and the downtown skyline. Then venture underground to the swanky subterranean wine bar Vin de Syrah. Those who still have energy to burn can line dance the night away at the country western Moonshine Flats, or the posh Parq Nightclub or Omnia Nightclub.