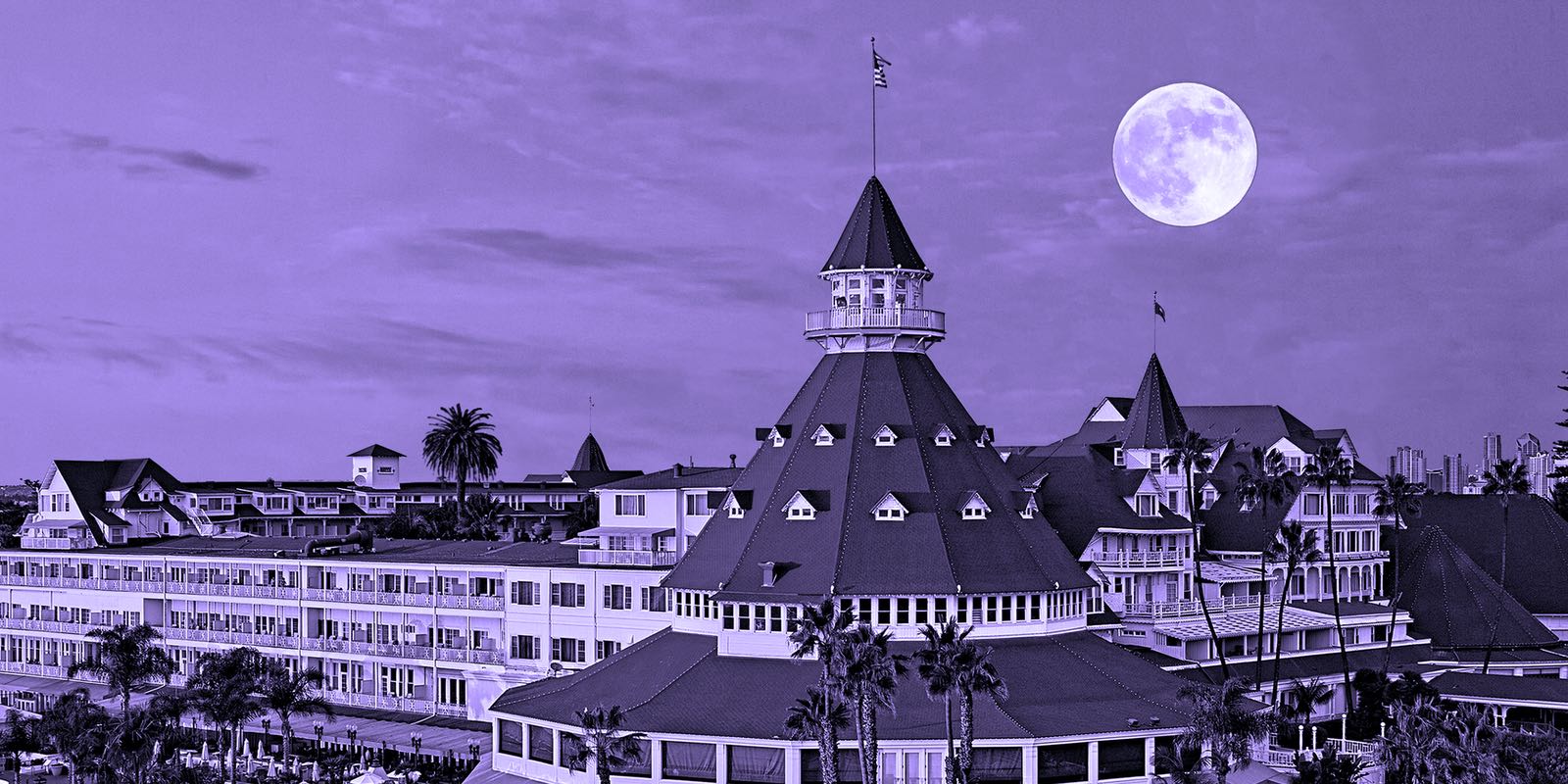 On the list of tried-and-true ways to make your heart race, getting a good scare and being with your sweetie are right there at the top. But then, why choose between the two? We’ve rounded up a collection of Halloween happenings and destinations around San Diego that will make you and your boo want to hold each other closer — plus some nearby bars and eateries where you can raise a toast to the ghosts or catch a bite between frights.

When: Thru October 31, 2021
At night, this family-minded destination transforms into a place that’s more scream park than theme park. Encounter multiple haunted houses, roving ghouls, a vampire circus and even a pulsingly spooky underground dance club. Make like penguins and pair up for the Halloween scares. And then enjoy the collection of “Sinister Cocktail Bars” — including the fetchingly named Ambarlance and Murder She Float.

When: Thru October 31, 2021
A new scare is just around every corner in this spooky little nighttime hike, which includes an “eXperiment Maze” teeming with creepy characters, plus a winding, mile-long stroll through various terrors that will inspire plenty of white-knuckled hand-holding. Then reward yourselves at Pure Project Balboa Park with a pint (or three) of Crimson Lotus. Or head over to Cucina Urbana, a Michelin “Bib Gourmand” honoree, for a cuddle and some truffle fries.

When: Thru October 31, 2021
You’ll definitely appreciate some companionship as you make your way through The Disturbance, the Haunted Hotel’s latest incarnation. The frights here come in three parts: Along with the Haunted Hotel, there’s Kill-Billy Chaos, plus a 3-D Freak-Fest. After those unnerving sights, unwind over some soothing Puesto Perfect margs at Puesto Mission Valley, or savor the house-made ceviche at Polanco Kitchen and Bar.

When: Thru October 31, 2021
The haunts come fast and furious in Old Town — San Diego’s top spot for spectral spectacles. And Ghost and Gravestones has got couples covered this Halloween. Climb aboard for a tour of the infamously haunted Whaley House as well as other spooky spots around Old Town and greater San Diego. Pair your scares with some tequila-sampling at the Tahona Bar, or delve into some traditional Mexican comfort food together at Café Coyote, followed by a romantic stroll down Old Town’s main drag.

When: October 29-31, 2021
Ghostly legends run through the lore of several of the vintage vessels at the Maritime Museum. And you’ll want to keep each other close, lest there be phantoms in the rigging. Climb aboard the museum’s ghost ship Mary Celeste (aka the schooner Californian) with your first mate for a Ghost Ship Sleuth mystery adventure. Then, regain your sea legs (and calm your nerves) with a brew and an oyster shooter at the Brigantine, situated right next door. Or stretch out your sea-weary legs with a short walk to Carnitas Snack Shack for specialty crafted cocktails, pork-centric bites and waterfront views.

Pioneer Park and its Gravestones

When: Open year-round
This happy little neighborhood park in Mission Hills happens to be constructed right on an old graveyard. You can check out some of the surviving tombstones along the edge of the park. But try not to think too much about what’s beneath as you picnic together on the grass. (This does happen to be one of the relatively few city parks that allows alcohol.) Those among the living can then venture over to the neighborhood favorite Fort Oak, with its U-shaped bar and such adventurous specialties as the goat-milk cavatelli. Or head down the hill to Blue Water Seafoodon India Street for fresh fish and homey chowder.

When: Nightly Thru November
Room 3327 at the Hotel Del Coronado might be about the most famous in San Diego. Why? Because of the legend of Kate Morgan, who died mysteriously while staying here on a solo Thanksgiving visit in 1892. Some say she was awaiting a lover’s arrival, and that she still haunts the grounds. True or not, make sure to book a Haunted Happenings Tour this Halloween. During the tour, you will walk in Kate’s footsteps as you uncover the mystery of her death. Plus, you might meet the other spirits who haunt the hotel. And you won’t want to miss a visit to the place’s on-site restaurants — the casual beachside favorite Sheerwater, and the more luxe seafood restaurant Serea. Take a moment to tip a glass to Kate, and to this beautiful place.